Ruoholahti Park is a modern urban green area that has been built to a high standard. The changes in the materials that have been use are clearly delineated. The plants have been elevated from the pedestrian path by kerbstones and low walls. At the centre of the canal is an event space with curving steps, two pedestrian bridges and a quay along the southern side.

The park is the most active part along the northern side. The needs of the local daycare centres and primary school were taken into consideration in the design of the park. A small playing field is situated on the street side and a playground on the canal side. The pedestrian and cycle path crosses through the park and by the playground.

The area between the main path and the canal is an area for relaxation featuring perennial plants and shrubs that blossom in different seasons. The pedestrian path along the canal opens up by the flower garden into an event space with curving steps.

The small playing field is half a metre lower than the surrounding pedestrian paths. The playing field is lined by a concrete wall that is also used for plants and surrounded by trees and shrubs.

The fenced playground is used very actively by two local daycare centres that lack their own gardens. Although there is little playground equipment, children still have fun playing in the open area, the two large sandboxes and the two artificial hills with slides.

This sculpture in the park is named after a Finnish nursery rhyme about a cat climbing up a ladder and was designed by Pekka Nevalainen (1951–). In the piece, a strong grey cat has climbed a ladder to reach the top of a large red letter A. The artist has used several materials: the letter A is painted steel, the cat is made of grey fibreglass, the ladder of stainless steel and the base is poured concrete. The work was financed from the adjacent arts and skills-oriented primary school’s appropriations and was finished for the opening of the school in 1996. 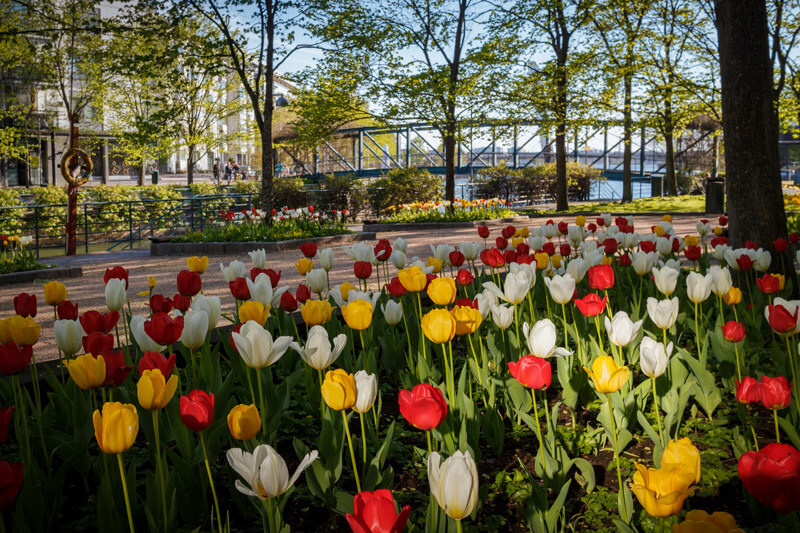