Pikku Huopalahti Park can be accessed from Tilkantori square, where you can admire the waterfall from a special platform that is decorated with linden trees trimmed to look like navigation marks. The park by the main bay is the largest in the area and is characterised by its wide open spaces. It was built on low-lying wetlands where young birch and alder trees grew. Almost three metres of landfill were added to create the park. The fenced playing field is used by local school children and other residents.

The low hill lined by elms and birches is ideal for sunbathing and throwing frisbee, for example. A large elm tree and a few birch trees stand on the former banks. In the middle of the park is a pond that collects storm water before it reaches the sea. Most of the park was once part of the bay, the existing part of which was dredged and the landfill used to create the park. The park was landscaped to allow water to flow gradually into the sea. A large drain from the Mannerheimintie road also flows into the pond. The areas around the pond have not yet been finished.

The main theme of the park is its wide open and wave-like lawn that is bordered by straight paths and clearly arranged plants on either side. The lawn narrows towards the shoreline. Viewed from the McDonald’s building, the lawn appears like a grandstand and is lengthened by the false perspective. This stage production trick creates an impression of space for the relatively small park and its main path.

The small square next to the lawn serves as the open-air terrace of the McDonald’s fast food restaurant, which is responsible for the maintenance and irrigation of the lawn. The surface of the lawn undulates considerably to dissuade footballers. Along Paciuksenkatu street are groupings of three different varieties of rowan trees, which look splendid in their autumn colours.

Rantapuisto Play Park is part of Pikku Huopalahti Park, which was designed by Terttu Hilli. It forms part of Pacius House, which also includes the Pacius daycare centre and the Solina home for adults with learning disabilities. Shrubs divide the park into different play areas. A natural environment has been created by using stones in the sand playing area, for example. There is a cycling path with colourful safety surfaces. The park is lined by handsome columnar aspens, which stand like guards watching over the children. The small playing field is very popular, especially among school children in the afternoon. 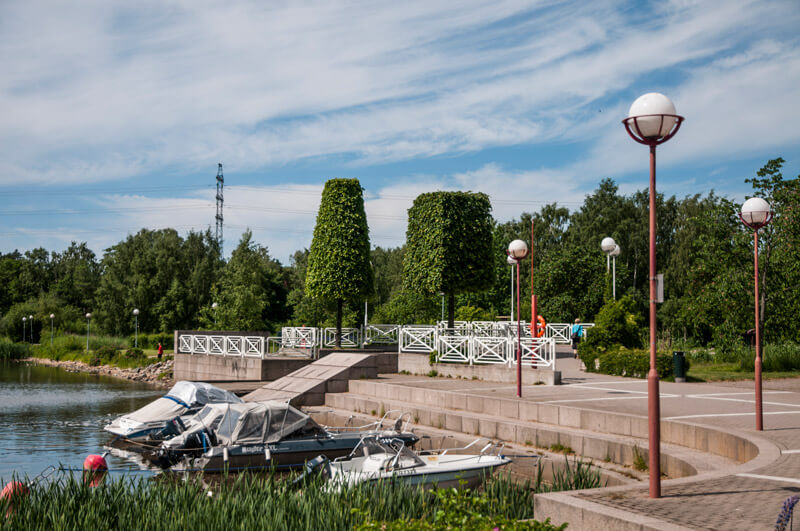