Ilveskorpi Park is the “Töölö Bay” of Vuosaari. People of all ages use the park for recreation and relaxation. Formerly known as Kangaslampi Park, it is situated in central Vuosaari, which is also referred to as “Old Vuosaari”. The houses here are spaced far apart, and their gardens are more like forests than gardens. The park begins south of the old Vuosaari shopping centre, between the streets Mustlahdentie and Kivisaartentie. The area around Kangaslampi is the oldest inhabited part of Vuosaari. According to researchers, the land here was farmed already over a thousand years ago. The current dwellings date back mostly to the 1960s.

The park is very natural and is dominated by the circular Kangaslampi pond, which was originally a muddy wetland. As recently as the 1960s children were warned to stay away from the marsh until it was eventually made safe. There are many urban legends about men and horses that drowned in the marsh, as well as one about a female “spirit of the pond” that lures men into the water.

During the most recent renovation, explosives experts from the military were called in to make sure that there was no unexploded ordnance at the bottom of the pond. Locals reported that all kinds of ammunition had been hidden in the pond at the end of the Second World War, but only decomposed gunpowder was found.

The shoreline around the pond has been partly restored to its natural condition, and there are two public piers with protective railings. The piers are particularly popular among the birds that nest around the pond. Even whooper swans, the national bird of Finland, have been spotted here. At night, water bats swoop over the water to feed. Northern bats can also be spotted at times around the treetops. Certain wetland plants, such as the fragrant marsh Labrador tea (Rhododendron tomentosum), are a reminder of the pond’s past.

The old playground was renovated along with the rest of the park in 1998. There are now separate playing areas for bigger and smaller children. A memorial plaque to Martti Ilveskorpi (1908–1973), a central figure in the development of Vuosaari, can be found on a rock close to the playground.

Martti Ilveskorpi was a visionary, idealist and organiser who wanted to enable ordinary people to own their own homes. In 1956 he established an association, Asuntosäästäjät ry, whereby people could put in 100 to 150 hours a month to help build up to three-quarters of their future homes themselves.

The shoreline is adorned by pipe and propeller sculptures created by Olli Salo (1967–). The sculptures are roughly cubical in shape and made of granite and spectrolite with various geometric figures and images of pipes and propellers. Salo’s timeless stone sculptures evoke both the tombstones of the Vikings and forms and semantics of contemporary art.

The park is also adorned by beautiful plants, such as hydrangea, honeysuckle, several perennials, natural flowers and water plants, as well as handsome Terijoki willows and flowering trees. Impressive rhododendrons can also be found on the eastern side of the park.

At the southern end of the pond is a wetland area that has been created by damming and landscaping. The amount of water in the marsh can be regulated by the dam. The wetland is an interesting area for visitors to the park, as well as for school children learning about biology. A verdant “jungle creek” feeds from the wetland into the pond. 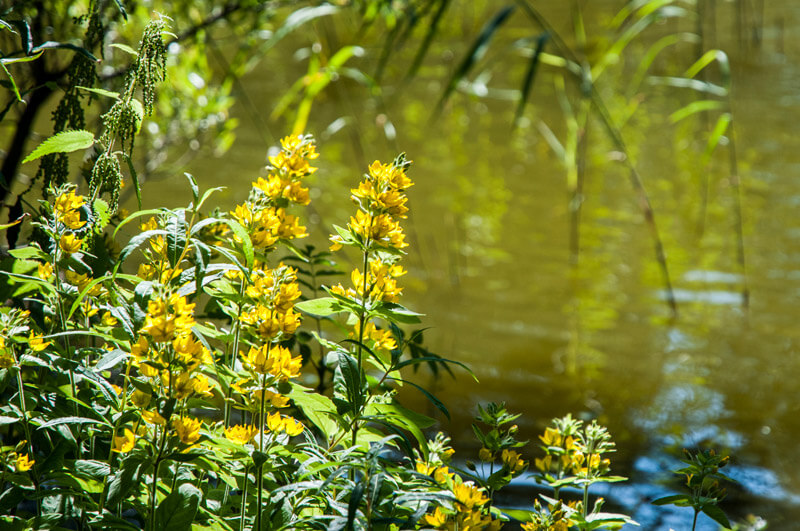 Hemmo Rättyä, spotted loosestrife
To previous page
To next page