The “Old Church Park” is one of the most popular green areas in the city centre. It is playfully known as “Plague Park” (Ruttopuisto), as victims of the plague in 1710 were buried alongside the church. The nicknamed was popularised by youth in the 1960s, and the park continues to attract young people to this day.

The Old Church (Vanha kirkko) is in fact now only the second oldest church in Helsinki. When the City of Helsinki expanded into parts of neighbouring Sipoo in 2009, Östersundom Church became the oldest church.

The graves in the Old Church Park remind us of the history of cemeteries in this part of town. Before the cemetery in the Old Church Park was established in 1790 there were four cemeteries in the Kamppi district. As many of the older buildings in the neighbourhood have had their pipes replaced in recent years, the excavation work has dug up a lot of surprises. It is estimated that over 10,000 deceased were buried in the cemeteries of Kamppi over a period of 130 years.

Helsinki suffered years of famine in 1695, 1696 and 1697. The unnamed victims were buried along what are now Fredrikinkatu and Bulevardi. Then in 1710, from August to December, Helsinki was struck by the plague, killing 1185 out of a total population of less than three thousand. Approximately half the victims were residents and the other half refugees from other parts and soldiers. The first victims of the plague were buried in the graveyard of the church in what is now Senate Square. During the peak of the plague in October the victims were buried alongside the graves of the famine victims of the 1690s on the Annankatu side of the park. The cemetery of the Swedish artillery (Artillerikyrkogården) was located beside the graves of the plague and famine victims up to the 1740s.

Russian soldiers entered Helsinki on 2 March 1808 and set up camp in the areas vacated by the Swedish army. Beginning in 1809 the Russian army used the land at what is now 71 Bulevardi as its burial ground, but this was discontinued when city planning reached the area and earmarked it for other use. The tsar gave his consent to remove the old cemetery and have the deceased moved to the shoreline next to Ruoholahti Bay. A year earlier the city reconstruction committee had designated the area as a Greek Orthodox cemetery; today the cemetery in Lapinniemi is maintained by the Orthodox Parish of Helsinki.

In this way the four historical cemeteries in Kamppi gradually made way for the growing city, and only the remnants of the graveyard next to the Old Church remain. Many of the streets in the neighbourhood, including Fredrikinkatu, Annankatu, Yrjönkatu, Lönnrotinkatu and Bulevardi, were built partially on the former burial grounds.

In 1786 the Parish of Helsinki decided to establish a cemetery outside of town next to the cemetery of the Swedish artillery and the burial grounds of the famine and plague victims. The new cemetery that was inaugurated in 1790 is now the Old Church Park.

The cemetery was gradually transformed into a park maintained by the parish. In 1816 Anders Kocke drew up a plan for the cemetery, planting new trees along the paths. In 1829, when the much larger Hietaniemi Cemetery opened, the parish discontinued burials in the Old Church Cemetery. The 48 gravestones that can still be seen in the park thus date back to the period 1790–1829.

The park was neglected after the cemetery was closed and became overgrown. Only the path from the gate to the church was maintained. When the city began to expand towards Kamppi and Hietalahti, the former cemetery was found to be an ideal park. In the 1850s local citizens Ernst Hjelt and F. E. Sanmark led a campaign to have the Old Church Park maintained. New trees were planted, the lawn was cut, and ornamental plants were ordered from abroad, such as Siberian peashrub that was planted along the fence. The first actual park plan was drawn up by Mårten Stenius in the 1870s.

The park transferred to the City of Helsinki in 1900, at which time the present paths were created and paved gutters added along the main paths. The simple wooden fence was removed and lamps added. The city’s first park plan dates back to 1936.

Almost ninety years after the last burial, two additional graves were added. One is the grave of 54 German soldiers who died during the liberation of Helsinki on 11–12 April 1918 and were buried on 16 April 1918. The other is the final resting place of Finnish soldiers, members of the White Guard and Civil Guard, who fell on 19 April 1918.

The third monument in the Old Church Park was erected in 1919 in memory of the Finnish volunteers who fell in the Estonian war of independence. The bodies of 25 Finns from Helsinki were carried back from Tallinn aboard the icebreaker Wäinämöinen, and a service was held on 16 February 1919.

An official ceremony was held on 31 October 1920 to unveil the war memorials. Already in spring 1918 the City Council has established a committee to prepare the memorial project. Small squares were built around the memorials and decorated with lawns and floral arrangements.

The Old Church Park again fell into disrepair over the following years. The overgrown trees blocked out the light, and the shrubs suffered as a result. The paths turned to mud in spring and autumn. Overall the park had the feel (once more) of a dreary cemetery that people walked through only as a shortcut; it certainly didn’t attract people to relax and enjoy themselves.

The renovation of the park was planned and implemented on the highest levels with a lot of respect to history. The gravestones were cleaned, the cast-iron lamps were restored and their wiring renewed. As a concession to modern needs, a children’s playground appeared next to the church already in the 1980s. During the renovation the playground was separated from the side of the church, making it possible to walk around the building unobstructed. The paths were drained and new crushed stone added, and paved gutters were added along the sides. The unsightly asphalt in front of the main entrance to the church was also removed and replaced by paving stones.

Many of the old trees, including maples, lindens and elms and oaks, were retained, but many that were in bad condition were removed and not replaced to let in more light. The park also features weeping ash trees and ornamental apple trees, as well as experimental magnolias, copper beech trees and pear trees. The shrubs in the park include lilacs, honeysuckle, rose bushes, forsythia, conifer shrubs and rhododendrons, beneath which ground perennials grow. New soil and turf were added to create a healthy lawn, which is now watered by an automatic sprinkler system. Seasonal plants adorn the memorials.

The main archway was restored a few years after the renovation of the park, and a public toilet has also been added. Today the Old Church Park is as popular as all the other parks in the city centre. Small events are also held in the park, especially on the Night of the Arts in August. 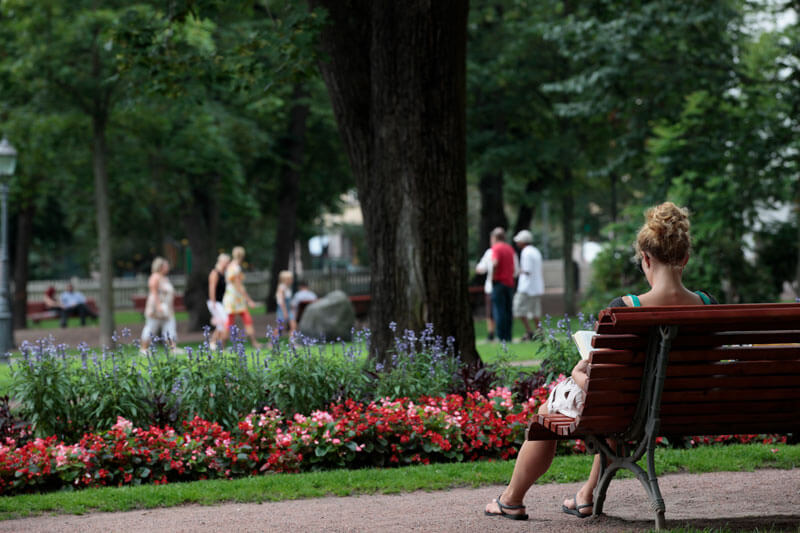