The popular Esplanade Park, fondly referred to as “Espa” among locals, is the most famous park in Finland and the green heart of Helsinki. People come here to see and be seen, to listen to music and watch performances, and to enjoy picnics.

The park was originally planned by the principle architect of Helsinki Carl Ludvig Engel in an area of low-lying wetland. The eastern portion (Chapel Esplanade) was referred to as “Small Calf Hook” (Pieni Vasikkahaka) and the central and western portions (Runeberg Esplanade and Theatre Esplanade) as “Large Calf Hook” (Suuri Vasikkahaka). The foul smelling Kluuvi Bay (Kluuvinlahti) extended southwards almost to the Esplanade, so a lot of landfill was required to construct the park in the 1850s.

Esplanade Park was designed as a green promenade in the Continental style. The more pragmatic reason for the tree-lined alleys was to promote fire safety; wooden buildings still predominated in the city, despite the growing number of stone buildings. The park is characterised by an architectonic style with its straight tree-lined alleys and flowerbeds. The rows of linden trees on either side of the park create a hall-like space. The design of the park was also influenced by Svante Olsson(1856–1941), Helsinki’s first City Gardener. The most recent renovation in 1998 was designed by landscape architect Leena Iisakkila.

One of the most historic restaurants in Helsinki, Kappeli was designed by architect Hampus Dahlström (1829–1882) and built in 1867. According to legend, the name of the restaurant originally referred to a booth from which a local “shepherd” boy (“pastor” in Latin) used to sell milk and which was affectionately known as “The Chapel”. This was followed by another “chapel” in the shape of a lofty building used by the confectioner Jerngren to sell pastries and lemonade in the 1840s. It seemed natural, therefore, to christen the new restaurant Kappeli. A public toilet can be found at one end of the restaurant.

Opposite Kappeli is Espa Stage, which hosts the longest festival of music in Finland each year from the beginning of May to the end of August. Each summer around 200 artists and groups perform on the stage. The programme is organised by the Cultural Office of the City of Helsinki. The current stage was built in the 1930s; the original stage was considerably more decorative.

On either side of the stage is a pool with interesting sculptures commissioned from Viktor Jansson (1886–1958) in 1939 and unveiled in 1942. Water Nymphs depicts a mermaid and child playing with a fish; the mermaid was modelled on the sculptor’s daughter Tove Jansson (1914–2001), world-famous creator of the Moomins. Hey There (Hi) depicts a small boy playing with a fish.

The pools are lined by perennials, such as moon lilies and exotic lilies of the Nile that spend the winter in greenhouses. Audiences listening to the performance on Espa Stage can also enjoy the summer flowers in the large flower pots. The open-air café next to the stage is open in summertime and also sells tickets for sightseeing tours departing from Fabianinkatu next to the park.

In the centre section of Esplanade Park, roses flower among the trimmed cotoneaster shrubs. When approaching the statue of J. L. Runeberg in early June, note the beautiful flowering crab apple trees (Malus Nipissing) on the northern side of the park. The statue is circled by columnar aspen trees, and laburnum bushes with exotic golden flower clusters also grow on the lawns.

An impressive flowerbed surrounds the statue of Johan Ludvig Runeberg (1804–1877), Finland’s national poet and author of the Finnish national anthem. The flowerbed is replanted three times a year: Pre-grown bulbs are planted after the May Day celebrations; colourful summer flowers are planted before the Midsummer holidays; and heather and conifer plants are introduced in autumn. In wintertime the large trees are brightly illuminated.

The statue of Johan Ludvig Runeberg was the first public monument erected in Helsinki. The unveiling on 6 May 1885, exactly eight years after the death of the poet, was a major event that was attended by the cream of society and 20,000 other patriotic Finns. The memorial committee was appointed by the Estates and headed by the author Zacharias Topelius (1818–1898). Local residents lit candles in the windows as a sign of patriotism, beginning a tradition that continues to this day on Independence Day (6 December).

”I Johan Ludvig Runeberg, the national poet of Finland, was born in 1804. And poems, I loved them from an early age. I was raised among humble people and it was these people I wanted to write about…” patsaspuhuu.fi/runeberg

The memorial was commissioned from the poet’s son Walter Runeberg (1838–1920). On the pedestal of the eight-metre-high statue stands the Maiden of Finland wrapped in a bearskin. In her right hand she has a laurel wreath, and a pile of Runeberg’s books lies by her feet. In her left hand she is holding a tablet with the words of the first and last two stanzas of the Finnish national anthem in Swedish (Vårt land). On the side of the memorial is the inscription “Suomen kansa maamme laulajalle – Af Finlands Folk” (“From the Finnish people to the Singer of our Nation”). Runeberg’s name does not appear anywhere on the memorial, as it was considered self-evident. The statue remains popular among the locals, and it’s a convenient place to arrange to meet.

The park benches were designed in connection with the renovation of the park in 1998, as were the black 120-litre litter bins with the city’s coat of arms. The lamps are also new but based on a historic model.

The western section of the park is dominated by the restaurant Teatteri and Svenska Teatern (the Swedish Theatre, familiarly known as “Svenska”). The theatre was designed by Professor Nikolai Benois (1813–1898), the court architect of Tsar Nicholas I, and completed in autumn 1866. The building was modernised and expanded in 1935–1936 under the direction of the architects Eero Saarinen (1910–1961) and Jarl Eklund (1876–1962). The architects left the heart of the theatre, the original beautiful red and gold auditorium, almost untouched. The most recent renovation was completed in 2012.

The park at this end is more shaded than the rest of the Esplanade, making it a pleasant place to sit on hot days. The old horse chestnut tree blossoms beautifully in early June. Rhododendrons, hydrangeas and seasonal plants flower next to the restaurant’s terrace.

Two memorials can be found in Theatre Esplanade. The first is to the author, journalist and historian Zacharias Topelius(1818–1898), the man behind the memorial to his friend Johan Ludvig Runeberg. When the memorial project began in the 1920s, the trend favoured symbolism over exact likenesses. The design competition organised in 1928 by the Society of Swedish Literature (Svenska Litteratursällskapet) was one by the sculptor Gunnar Finne (1886–1952). Fact and Fable was unveiled in 1932, 34 years after the death of Topelius.

“Yes – the vision of the artist Gunnar Finne – very fine, interpetation and symbolism. The other statue of me in the park by the Design museum is also quite fine, it was created in my likeness by Ville Vallgren. Very fine. I, Zacharias Topelius, am a man of two statues…” patsaspuhuu.fi/topelius

The second memorial is to the great Finnish poet and journalist Eino Leino (1878–1926), the first writer to use the Finnish language fluently for all artistic purposes. The memorial was designed by the sculptor Lauri Leppänen (1895–1977), a personal friend of Eino Leino. The Eino Leino Society, the Finnish Cultural Foundation and the publishing company Otava organized a competition for a memorial to Eino Leino in 1948. The final round of the competition was held in 1951 and won by Leppänen. The memorial to Eino Leino was unveiled in 1953, 27 years after the death of the poet.

”I was out last night. Once again. We were at the Kämp – there were me, Sibelius, Kajanus, Järnefelt and Aho. Writers and composers. We were there a long time and got through a lots of alcohol…” patsaspuhuu.fi/leino

In 1999 the first “Helsinki model” City-WC was opened in Theatre Esplanade. The public toilet was designed by the architect Juhani Vainio from the Public Works Department of the City of Helsinki and manufactured in Sweden. The toilet has two parts: a larger pay section with a toilet, sink and changing table for babies that is accessible also by wheelchairs, and a free-of-charge pissoir that was later converted for use also by women. The City-WC is cleaned once a day. 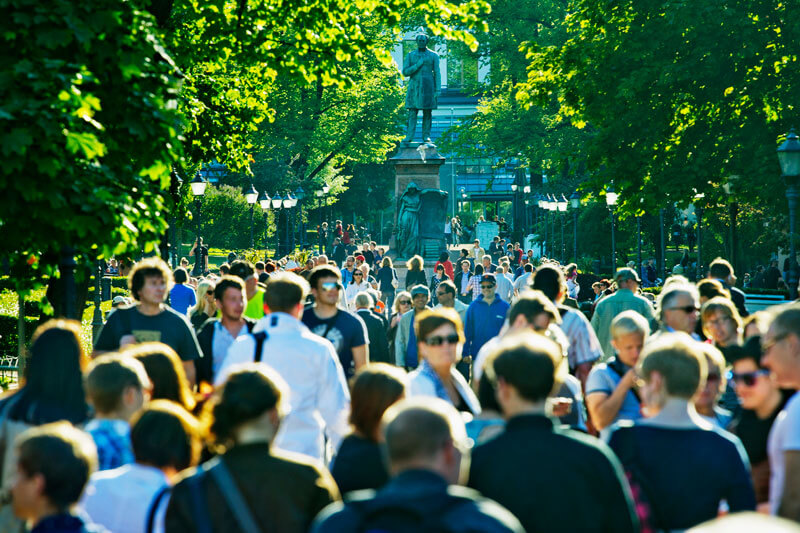