Across the street from the Old Church on Lönnrotinkatu is a small green named – like the street – in honour of Elias Lönnrot (1802–1884), creator of the Finnish national epic, the Kalevala. Dominating the green is a memorial to Lönnrotin the shape of a cast bronze statue on a massive pedestal.

The memorial sits atop a small hill and is surrounded by flower beds with seasonal plants. On either side of the memorial are benches amid honeysuckle plants. Lilacs and two ornamental apple trees grow on the lawn and were planted by the charitable Martha organisation. The entire green is lined by linden trees.

In the city plan of 1830 the area was referred to as “Church Square” (Kirkkotori). Later the centre of the small square was planted, apparently according to the design of City Gardener Svante Olsson. In 1898 the city reserved the space for a memorial to Lönnröt.

The design competition was organised by the Finnish Literature Society in 1899 and won by the sculptor Emil Wikström (1864–1942). It is said that Lönnröt himself invented the Finnish word for literature, “kirjallisuus”, when the Finnish Literature Society (Suomalaisen Kirjallisuuden Seura) was founded in 1831. The sculpture was cast in bronze in Brussels and unveiled, in secret and at night, on 18 October 1902, 18 years after the death of Lönnrot. The ceremony was held in secret because Finland was still part of the Russian empire, and any kind of expression of national sentiment was closely monitored.

The memorial depicts Lönnrot on one of his folklore-collecting journeys, writing down the mythical words and poems he has just been sung. On his right is Impi, symbolising the lyric poems and songs of the Kalevala and Kanteletar. On his left is the god-hero Väinämöinen, the central symbol of the Kalevala’s epic and magic verses. Väinämöinen is rising from the upside-down head of Antero Vipunen, another character in the Kalevala who is represented in bas-relief. In the 17th poem of the Kalevala, Väinämöinen visits the giant Vipunen in search of the missing words for his incantation. Emil Wikström sculpted a mystical pentagram in the forehead of the giant. The front of the pedestal contains Lönnrot’s name and the text: “Sain sanat salasta ilmi, Kalevala” (The words I laid open, Kalevala). 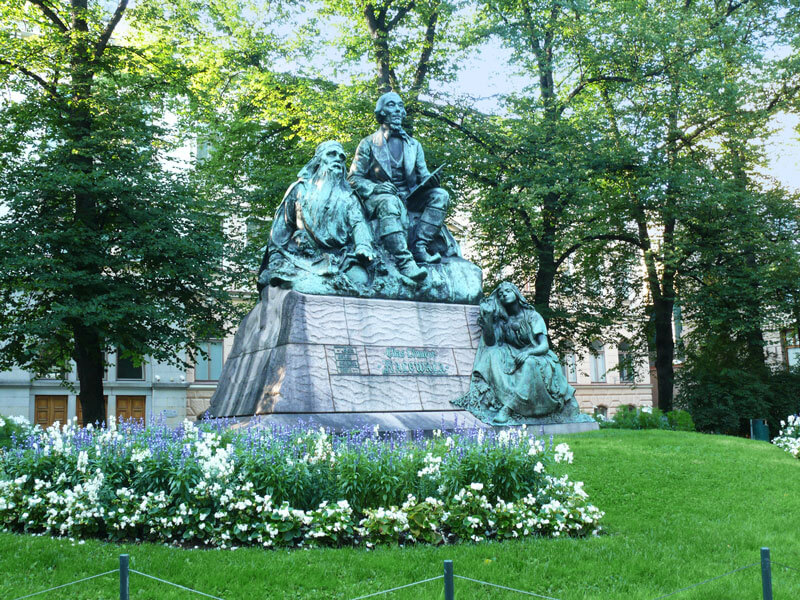 Wikimedia Commons, a memorial to Lönnrot