Originally referred to as a garden (Ritarihuoneentarhanne) in the 1800s, this green is a small but refined oasis in the built-up district of Kruununhaka.

Although the green belongs nominally to the nobility, it is maintained by the city; the original maintenance agreement was made by City Gardener Svante Olsson in 1889. At the time the park was in poor condition. The changes he made had an immediate effect on the appearance of the park, but the removal of old trees and shrubs was controversial – as it is always still is. Contemporaries did not like the idea that the old shrubbery was replaced by a flat lawn, curving paths and imported ornamental plants. The central element in the park is a beautiful and historic fountain.

The park was renovated in 2000, when Helsinki was officially designated a European City of Culture. Mirja Ruokokoski, Park Designer at the Public Works Department, drew up a plan that retained the old form and character of the park. Two fine crabapple trees of the species Malus prunifolia ‘Hyvingiensis’ grow in the park. The trees, which have weeping branches on short trunks of 1.5 to 2.5 metres in height, are among the biggest of their kind in Helsinki. When they blossom they create a beautiful cloud of white flowers, under which it is fun to hide and take in the splendid sight. Further information about the House of Nobility and the history of the nobility in Finland can be found on the House of Nobility website. 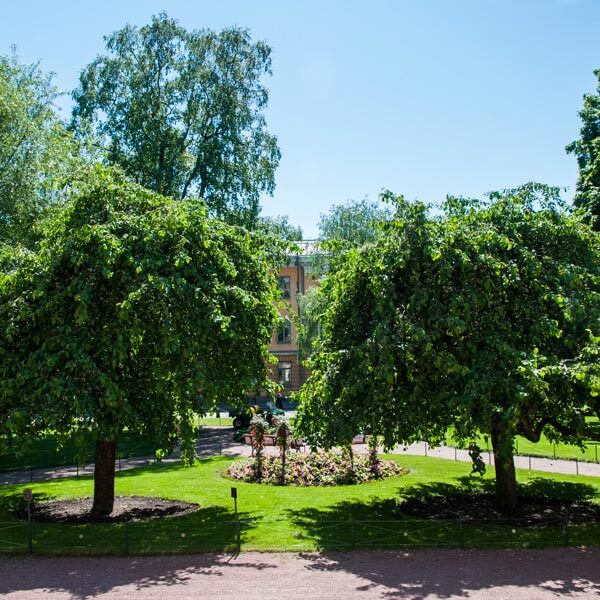