The historic Porslahti-Marielund road used to pass through what is now Punakivi Park. The area has been used for agriculture for centuries. Two barns belonging to the Marielund farm were once located on this land.

Before entering the park, you can stop and admire the collection of shrub roses at the Rosarium, which includes traditional Finnish roses, cultivated varieties and unidentified species.

Punakivi Park offers visitors the feel of the countryside. The park was a popular attraction among Finnish gardening enthusiasts in the 1980s and 1990s, as it was among the first parks to have its own wild meadow. The idea of creating natural meadows in the city’s green areas was first proposed in the 1970s.

In 1980 the East Helsinki unit of the Public Works Department began to experiment with different types of flower meadows under the leadership of district gardener Jukka Toivonen. The plants in these meadows included St. John’s wort, nettles, burdock, sorrel, lady’s mantle, cumin, meadowsweet and pussy willow. The local chapter of 4H helped collect the first seeds. The plants and trees had to be selected carefully to ensure that they thrived and that they wouldn’t impede each other’s growth.

Creating a meadow involves more than just scattering seeds over the ground. It is a long-term process that requires the right type of soil and domestic seeds that were first sown in sand. The meadow also had to be weeded by hand to prevent the delicate plants from being covered. The meadow plants are mown in late summer once the seeds have been shed, and the meadow is cleaned to protect the soil and ensure rich flowering the next season. The meadow behind the fence is now well established, and people still visit the park to admire it.

In addition to the meadow, the park also has a field and pasture, as well as pretty meandering drainage ditch lined on both sides by natural plants. Information boards are centrally located where the paths intersect telling more about the landscape. The park would be a perfect countryside idyll if only there were still grazing cows. 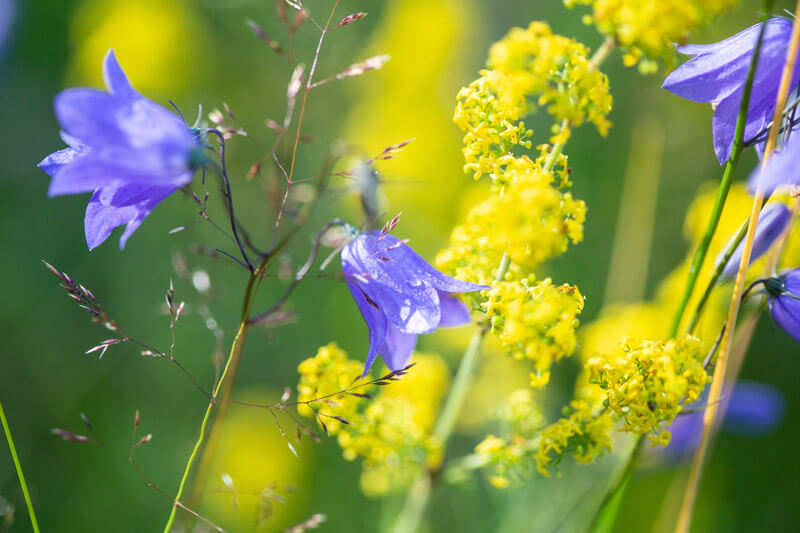 Margit Jensen, harebell and yellow bedstraw
To previous page
To next page