The Pihlajamäki Youth Park opened in 2009 and represents the latest design methods and thinking. Located in the Savelanpuisto park next to the Vantaanjoki river, the youth park is part of a large green area referred to as Helsinkipuisto (Helsinki Park). The park is on low-lying land that was once used for farming and flood meadows, and it is lined by the forested slopes of Pihlajisto and Pihlajamäki. In the northern section of the park there is a playing field and paths that were built over the past decades, as well as planted forest stands.

The youth park project began in 1997, when a skateboarding area was built on the initiative of local youth. When some girls complained that parks are always designed for boys, it was proposed that they would be given the chance to participate in the design of a new youth park. The Pihlajamäki Youth and Girls’ Park Project was duly initiated in 2004. Over two hundred young people between the ages of 7 and 25, including school pupils, the youth centre, groups of boys and girls, and skateboarders, participated in various stages of the design work.

The layout of the youth park is straightforward and open, and it is based on the previous development phases of the park. The vistas to the river and Pihlajamäki have been retained. The park now features three new functional areas: a girls’ park, a boys’ park and an exercise park. The new areas are situated close to the new maintenance building and the edge of the park.

The girls’ park (also known as the “swing park”) is built on undulating terrain. Cherries of the Prunus pensylvanica and Prunus padus ‘Colorata’ varieties, as well as flowering Spiraea plants, grow in this section. The equipment requested by local girls includes swings, carousels and balancing frames. The swings are grouped between the forest stands and flowering knolls, which create a sheltered area.

The girls’ park features four specially designed swings where girls can sit opposite each other and chat to one another. They can also practice their balancing on fun balls, and there are three canopies under which they can hang out. The amphitheatre-like stage in the middle of the park can be used for dance performances, and girls have their own lawn for playing on.

The area is divided in two by a branch of the Longinoja creek and a Thuja hedge. Where the branch of the creek ends there is a park building were supervisors can organise activities indoors in bad weather. Wetland plants have been planted along the banks of the creek, including yellow loosestrife (Lysimachia vulgaris), yellow irises (Iris pseudacorus) and sedges.

The boys’ park is more extreme. It features a freestyle park that has the biggest vert ramp in Finland, a dirt track and areas for skateboarding, freestyle and BMX riding. The equipment was designed and partly built by the young people themselves. The area is bordered by embankments, aspen trees and a honeysuckle hedge.

The exercise park is situated inside an oval field close to local schools. The fenced multifunctional area is circled by a running track. The lighting in the park was renewed during the renovation. The park is also fully accessible. The terrain is flat, and there is unimpeded access to the girls’ park, the main square, the multifunctional arena and the basketball court. 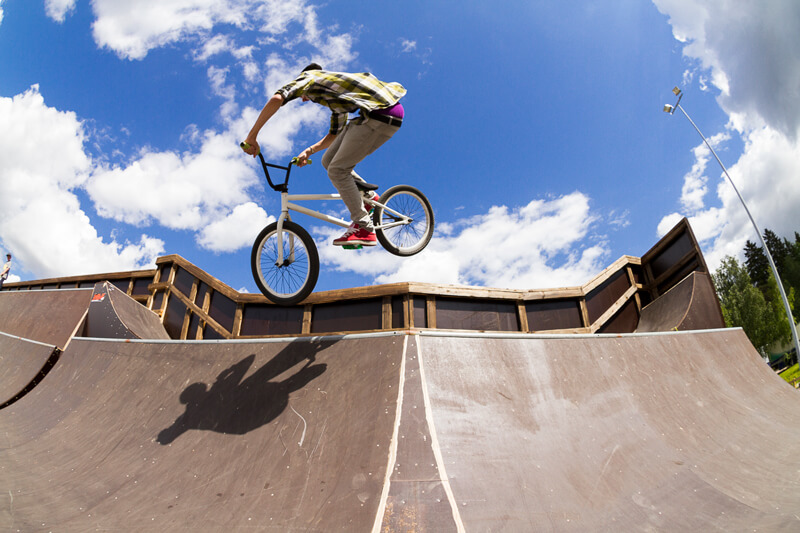