The word arboretum comes from the Latin word for tree, arbor. The word first appeared in literature in 1833 and was used to refer to the part of a garden that nurtured and presented exotic trees. Today the term refers more generally to a botanical garden containing living collections of trees and shrubs. In Finnish the term used is “puulajipuisto”.

Arboreta play an important role in research and education, as well as for plant breeding. For the general public they are pleasant and interesting attractions thanks to the rich variety of plant species, which give the impression of being abroad.

The “dynamic perennial planting” in Meilahti Arboretum is an experimental planting from 2012, representing a new, more sustainable and natural way of using perennial plants. The planting model is based on nature, where meadows consist of several layered and overlapping species all growing alongside one another.

The maintenance of a dynamic planting differs from that of a traditional planting and is mainly steering in nature. The planting is supposed to resemble a blooming meadow, where the plants intertwine, forming varied and interesting combinations. Seedlings are not removed and the planting is not watered. The plant species are allowed to move around in the planting area. Over the years, the way the planting grows is steered by nature. The appearance of the planting varies year by year due to weather conditions and the amount of rainfall as well.

The group of perennials was planted in autumn 2012, under the shade of Amur maples. The area was first covered with weed barrier matting made of recycled paper and jute netting. The matting was then topped with a 20 cm layer of perennial soil.

The perennial planting consists of 13 plant species that thrive in the shade. They were organised into three different species mixes, the arrangement of which is presented as an indicative type square. Each type square contains 4–7 different species. The planting area was divided into 1.5 x 1.5 m grids, in which the seedlings were planted according to the type squares.

Nature sustains and offers its thanks!

The development of the experimental planting has been monitored annually. After the first few years, the planting has needed hardly any maintenance at all. It has developed by itself in a manner similar to natural groves.  The City of Helsinki has committed to upholding natural biodiversity. Because of this, we will be adding more dynamic perennial plantings to our green spaces in the future. 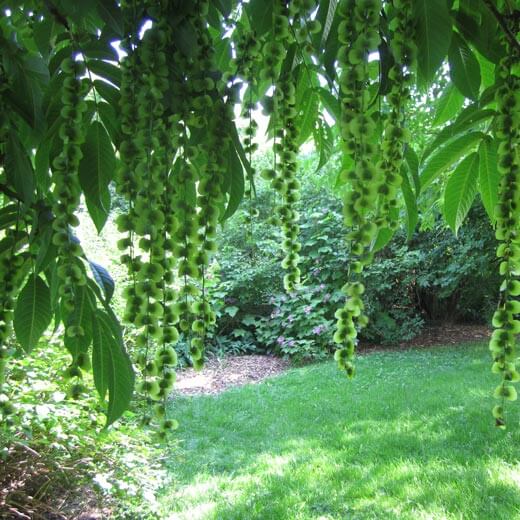 Elina Nummi, Japanese wingnut
To previous page
To next page