Helsinki’s image was enhanced in 1843 when the influential procurator Carl Johan Walleen (1781–1867) had a villa built for himself on land he leased in the southern section of Hesperia Park, then still outside the city’s borders. The land had once been used as the pastures for a guesthouse.

Hakasalmi Villa was designed in the style of a manor house by architect E.B. Lohrman from Berlin. Up to then the area had been very unsightly, with no trees and wet marshes that were dried for the new garden that Walleen had built around his villa. New trees were planted, but some of the park was destroyed in 1860 by the construction of new railway lines.

The last private owner of the villa was Walleen’s stepdaughter, the renowned philanthropist Aurora Karamzin (1808–1902). When the lease on the land was expiring, the City of Helsinki claimed the villa in 1896 and paid Aurora Karamzin compensation of FIM 60,000. Aurora Karamzin was allowed to live in the villa until her death in 1902. The park was then opened to the public in 1903. The villa was first used by the State Historical Museum (predecessor to the National Museum of Finland) and the Industrial Art Museum (predecessor to the Design Museum). In 1912 Helsinki City Museum moved into the lower floor, and today the villa is still one of the museum’s exhibition branches. The Huvila Café (Huvilan Kahvila) operates out of the side building.

The villa’s garden is adorned by a flowerbed designed in the historical style. Old fashioned perennials, such as plume poppies, also grow in front of the villa. Behind the building in the yard visitors can search for the grave of Aurora’s dog. The park lost a portion of its western edge in 2008 during excavation work for the service tunnel to the new Helsinki Music Centre. Efforts to protect the historical park came too late.

The white marble congress and concert venue Finlandia Hall was designed by legendary architect Alvar Aalto (1898–1976) and constructed on the site of a popular baseball field from 1967 to 1971. The congress wing was constructed from 1973 to 1975. Finlandia Hall is widely recognised as one of Aalto’s crowning achievements, although its curling Carrara marble panels have caused a lot of headaches for the Public Works Department. The City of Helsinki is responsible for the administration of Finlandia Hall and for renting out its facilities.

”Me, president of the republic of Finland Urho Kaleva Kekkonen. Organizing and chairing the conference on security and co-operation in Europe demands nerves of steel, which I have…” patsaspuhuu.fi/kekkonen

Outside Finlandia Hall are fine poplars and yews, as well as an impressive larch. There is also a monument to President Urho Kekkonen (1900–1986) entitled Spring, which was designed by the sculptor Pekka Jylhä (1955–). The monument was unveiled on the centenary of President Kekkonen’s birth on 3 September 2000 by then-President Tarja Halonen. The pool subsequently became popular among both ducks and midnight swimmers, so soon after it was unveiled ladders had to be installed for safety reasons – even though swimming in the monument is strictly prohibited. Duck droppings and leaves also caused problems for the pool’s pump system. 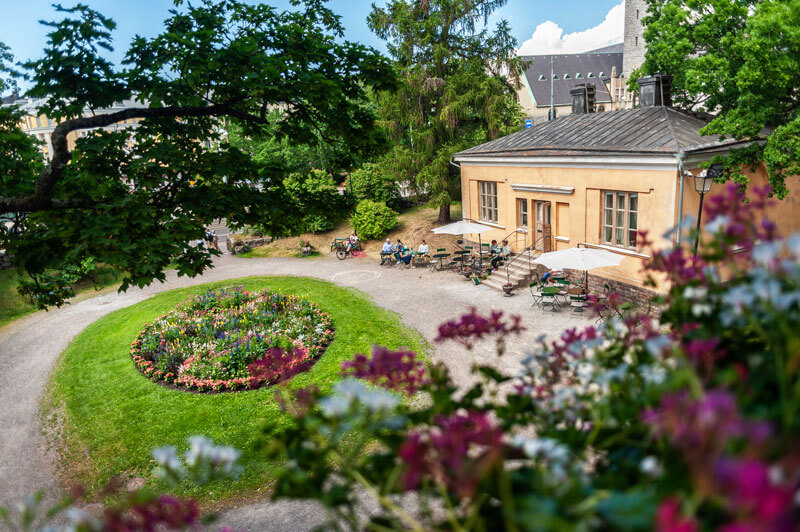