Hesperia Esplanade divides the district of Töölö into two parts, Etu-Töölö and Taka-Töölö, between Mannerheimintie and the Taivallahti bay. The esplanade itself is divided into sections with different functions and plants. The horse chestnut alley is the biggest of its kind in Finland and maybe all of Europe.

History of the park

Already in the 1700s a street named Edesviksvägen connected the Töölönlahti and Taivallahti bays along what is now the esplanade. In the late 1800s it was called Fattiggårdsvägen, referring to the local poorhouse that it led to. In the early 1900s the villas of the Taipale and Berga areas were located along what is now the esplanade. A city abattoir was located by shore of the Taivallahti bay, while the so-called Strömsten plantation was located along the northern side of what would become the esplanade. The plots were rented mostly by Russian gardeners for growing vegetables that they then sold in town.

The buildings in Töölö at the time were mainly wooden rental villas. The town plan by architects Gustaf Nyström (1856–1917) and Lars Sonck (1870–1956) was approved in 1906. Etu-Töölö was constructed mainly in the 1910s and 1920s, followed by Taka-Töölö from the 1930s to the 1950s with the exception of the buildings along the western side of Mannerheimintie, which were built already in the 1920s.

Thought was given to cleaning the Töölönlahti bay already in the late 1880s. In 1891 a proposal was made to clean the water by building a canal between the Töölönlahti and Taivallahti bays. The canal would have improved the exchange of water in Töölönlahti, and it would also have enhanced the attractiveness of the city. Planning for the canal project continued for 20 years, but ultimately it was feared that it would be too expensive to implement, especially with all the bridges that would have been needed. It was also feared that the slow flowing water would carry diseases. The idea of a canal was thus replaced by plans for a broad esplanade. Town planning architect Bertel Jung (1872–1946) drew up two slightly different proposals in 1910 and 1911. The esplanade was ultimately realised according to the design of Birger Brunila (1882–1979) made in 1933.

When construction began in 1934, a lot of granite had to be blasted throughout the park area. The resulting gravel was then used as the foundation for the paths. Trees were planted in 1936. Johan E. Aranko, City Gardener at the time, selected horse chestnuts, which blossomed beautifully and were quite exotic in Finland at the time.

The new esplanade was widely praised in the media. In the centre section of the park where the paths intersect, a square was bordered by trimmed hawthorn bushes and four oak trees. The esplanade itself was bordered by a narrow walking path covered by ceramic tiles.

The park originally boasted splendid perennials and summer flowers that thrived when the trees were still relatively small. Swings and sandboxes were introduced for children, and park wardens made sure that the equipment was kept in shape and that visitors behaved properly. Construction of the western section of the park was delayed by the landfill work by the Taivallahti bay; in the early 1900s the sea extended all the way up to what is now Mechelininkatu. The landfill work was completed in 1943.

Bengt Schalin, City Gardener from 1946 to 1957, augmented the number of plant species in Helsinki considerably. In 1947 he created flowerbeds in Hesperia Esplanade that were lined by a wave-like slate path. It became known as lovers’ lane and was widely admired. Schalin also seems to have been responsible for the other plantings that were added in 1949, some of which survive to this day. As the trees grew shadier, the perennials were gradually removed by the end of the 1960s.

The Taivallahti play park was opened on the western side of Runeberginkatu in 1968. Indoor facilities measuring 50 square metres were built in 1976. In front of the play park is a large playing field. The park is bordered by lilac bushes and elm trees. The play park and building were renovated in 1989 and 1990. The playground area was redesigned by landscape architect Leena Iisakkila. A new building and shed were constructed in 2001. The play park features a paddling pool and pretty roses. The play park is very popular throughout the year.

”I have been an upright man, a man of good posture, but I have had to bend to a lot of demands in the interest of the nation. There was never time to ask for permission from all sides. I have had to weigh the consequences myself…” patsaspuhuu.fi/ryti

The memorial to Lauri Kristian Relander (1883–1942) was designed by Matti Peltokangas (1952–) and is entitled “From bottom to top, from top to bottom”. The work was unveiled on 29 November 1996 at the Runeberginkatu end of Hesperia Esplanade.

”I have been good at giving speeches and appearing in public. I am persuasive even if not everyone thinks so. Because I have managed our foreign relations and travelled a lot, some has scoffed and began calling me as travelling Lauri…” patsaspuhuu.fi/relander 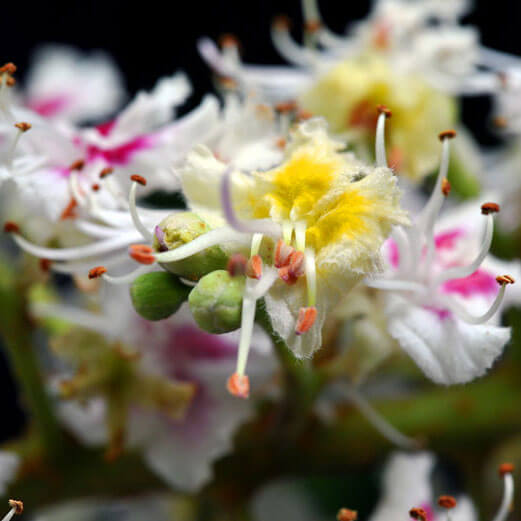 Vladimir Pohtokari, The exquisite blossom of a horse chestnut