Engel Square in the heart of the prestigious Eira district is named in honour of Carl Ludvig Engel (1778–1840), designer of the historic centre of Helsinki.

The park was built in 1920 and represents a minimalistic style with simple geometric forms. The park consists of a geometric park on the slope leading down towards the sea and the square bordered by hawthorn bushes. The white wooden benches are the same model as those in Kaivopuisto and were handmade in the late 1990s according to the original design. During the same renovation work, the original wallpaper-style floral arrangement was recreated.

On the slope leading down towards the sea is a memorial to Juhani Aho, the first professional Finnish author after whom the park is also named. Born Johannes Brofeldt, Juhani Aho (1861–1921) had a decisive influence on the development of Finnish prose and played a central role in introducing the literary ideas and fashions of the late 19th century Europe to Finland. Aho was a central cultural figure in his time, as well as an important journalist and translator.

The memorial to Juhani Aho was unveiled on the 100th anniversary of the author’s birth in 1961. The memorial was proposed by the Juhani Aho Society, and the realistic statue was commissioned from Aimo Tukiainen (1917–1996). Two copies were cast, and the other was erected in Iisalmi in the same year. The statue is cast in bronze and measures 2.8 metres in height. Juhani Aho spent the last years of his life with his wife, the painter Venny Soldan-Brofeldt, living in the building in front of which the statue is located (Armfeltintie 6). Roses grow in front of the statue. 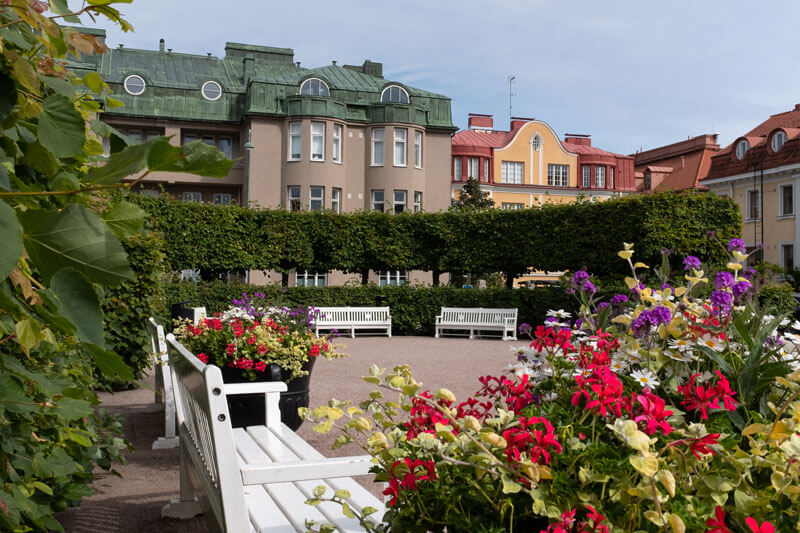 Paavo Jantunen
To previous page
To next page