Eira Park was originally known as Eira Green (Eiranpuistikko) and fondly referred to among locals as Flower Park (Kukkapuisto). It was created at the same time as the prestigious district of Eira in the early 1900s. During the city planning work in 1905–1907, the creation of small greens was proposed to ensure a diverse and pleasant city landscape.

The initial idea of establishing a villa district on the southern tip of the peninsula was voiced in 1899, and in 1905 the City Building Office drew up the first zoning proposals for the district. In the following year the architects Armas Lindgren (1874–1929), Lars Sonck (1870–1956) and Bertel Jung (1872–1946) submitted a letter of protest to the City Council and a proposal for an alternative master plan.

The City Council requested the opinion of the Gardening Board, which was responsible for the city’s parks and green areas at the time. The board approved the alternative plan almost without exception, and the City Council passed a motion in favour of the new zoning proposal, which emphasised especially the systematic planning of green areas.

The original design of Eira Green was the work of the city gardener, Svante Olsson. Along with the other green areas in Eira, the park provided a very sophisticated addition to the city landscape. It was and remains to this day a continental oasis among all the residential buildings. In 1911 the City Council allocated funds for building the park at the corner of Laivurinkatu and Tehtaankatu. The general layout of the park is still true to the original design.

The origins of the park were not very elegant. The city gardener’s annual report for 1912 mentions that area designated for the park contained a deep pit that was used as a general dump in order to fill it in. In addition, earth and construction waste from the surrounding building projects were dumped there.

The park was thus built on top of the dump. The design was based on German-influenced garden architecture, perhaps because Svante Olsson’s son Paul Olsson (1890–1973) had graduated as a garden architect from the Köstritz Higher School of Horticulture in Germany. Construction of the park was completed in 1913.

Eira Park has always been a traditional baroque-style park designed for strolling, admiring the plants and relaxing on the park benches among the trees and flower beds. By contrast, play areas were designated across the street in the new Tehtaanpuisto park in the 1920s and 1930s.

According to original photographs and gardening documents, the original park design was extremely rich and diverse. The variety of plants was at least as extensive and unique as in the city’s older parks. A large number of different themes were meticulously combined in the small park. The result was an exquisite garden-like environment. The most visible element in the design is the pair of large flowerbeds with perennials that blossom throughout the summer. In springtime the orange azaleas impress with their large flowers, and they are followed by Helsinki’s signature flowers, lilacs.

In 2000 a fine marble sculpture designed by Matti Haupt (1912–1999) was placed in the southwest corner of the park. Three Vessel-Carrying Boys was donated to the City of Helsinki by Kesko Oy in 1962. It was originally located in front of the Kesko Oy head offices on Kanavakatu, Katajanokka, from where it was transferred to Helsinki Zoo. Unfortunately, the sculpture was vandalised in its first year in Eira Park, irreparably damaging the porous marble.

Across the street from the park is the majestic Eira Hospital, a masterpiece of Art Nouveau architecture designed by Lars Sonck (1870–1956) and completed in 1905. The hospital was named after Eir, the Norse goddess of healing, and gave the district its name. The hospital was founded as a private institution by 13 doctors, who wanted to create a cosy atmosphere. In 1910 Lars Sonck designed an extension for the popular hospital to house the wards. The private hospital is today a modern medical centre that has retained its fine exterior and interior. 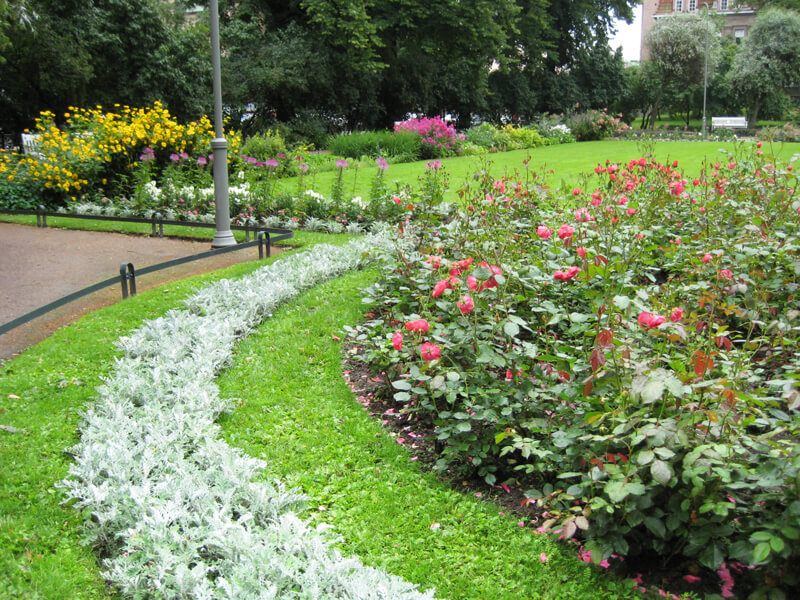 Satu Tegel
To previous page
To next page