Viikinoja Park is the central green area in the district. Its main element is the Viikinoja brook, which represents an ecological solution for cleaning the water. This project is carefully monitored to help plan the remediation of other small water systems. Runoff water collects in the brook, which was designed to slow the flow of water with its winding shape, natural plant life and tiny islands. This is meant to improve the quality of the water before it flows into the bay and nature reserve.

The Viikinoja brook begins in the Kivikko district by the edge of a forest near the Malmi shooting range. It then flows under the Kehä 1 ring road to Viikki. It previously flowed through the fields in a north-south direction, but it was redirected to flow along the eastern edge of the residential buildings. After the ecological cleansing section the brook flows directly as a drainage ditch through the fields into the Purolahti bay. The amount and flow of the water in the brook varies.

An open landscape with fields and meadows

The northern section of Viikinoja Park is primarily a continuation of the open landscape of the southern section lined with trees and groves. The open landscape narrows towards the north and ends at the beautiful contemporary wooden church, which connects the park to Latokartano square. Behind Viikki Church are two small ponds that have been nicely landscaped and gladly used by the local ducks.

The view that opens to the south from the community service centre is one of open treeless fields. The area between the green area and the built-up area is lined by the edges of the forest, individual trees and stands, meadows and lawns that blend in with the surrounding buildings and gardens. The open fields can be used freely, and relaxation areas and benches are situated in the smaller parks along the edges and at the intersections of pedestrian and bicycle paths.

The narrow western section of the park between the built-up areas has a canal lined with plants and rocks. In the northern section, the surface, drainage and roof water flow into basins, as does the ground water to the north of the Lahdentie road. In the central section of the park, the banks of the canal have been lowered and a basin formed. The basin is separated from the downstream section by a submerged weir, which also helps retain water when there is little flow.

The park sections lined by the open fields are divided into individual landscape meadows each with a different set of plants, including trees, shrubs and grasses. These meadows are along the western edge of the park and are lined by trees and dry slopes to the northeast where groups of trees, shrubs and grassy meadows grow along the Viikinoja brook.

The eastern section of the park was built in 2006 to 2008. The park is mainly lined by residential and service buildings. The view opens up to the southwest to the fields of Viikki. The park can be accessed from two places along the Latokartanonkaari road.

Several bridges have been built across the Viikinoja brook, the most impressive of which is Niittysilta designed by architect Juhani Pallasmaa. This bridge features an ornate wooden canopy. To the east of the bridge the brook widens into a pond.

The banks of the brook are an excellent place for students from local schools and the university to study the flora and fauna. Bulrushes (Typha), purple loosestrife (Lythrum salicaria) and yellow irises (Iris pseudacorus) thrive along the banks, as do various grasses. Small birds sing in the bushes, and dragonflies, butterflies and other insects can also be seen. Rare birds that have been identified along the brook include the spotted crake and corn crake. For local residents, the brook could be a nature reserve that they could help keep clean in spring and autumn.

In accordance with the EU Water Framework Directive, Helsinki initiated its own special programme for small waters in 2007. This programme is part of Helsinki’s ecological sustainability action plan. Helsinki has 25 small streams, brooks and creeks, as well as six ponds, five wetlands and six springs. These small waters are pretty and interesting to look at. They add to the natural diversity and are often ideal ecological corridors for wildlife.

It is important that small waters do not carry runoff water, i.e. rainwater and meltwater, from roads and roofs directly into the sea. Accordingly, the Viikinoja brook has been designed to clean the water along the way by slowing the flow and using natural plants. Helsinki also has a storm water management programme that is in line with the small waters programme.

Small waters also play an important role in absorbing floods. Helsinki’s small waters are maintained by removing litter and waste twice a year and by trimming the plants as required. The screen bars and drums are also kept clean. Local anglers help maintain the spawning gravel in some streams to encourage trout to lay their eggs, for example. Helsinki also has its own Park Pals programme that enables local residents to help maintain the city’s parks and streams. 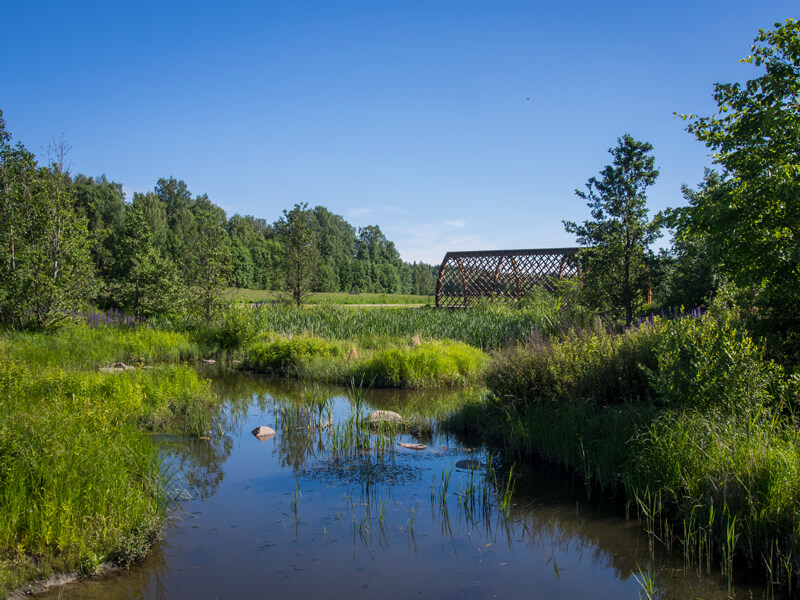