Topelius Park is dedicated to Zacharias Topelius (1818–1898), the journalist and author of books of fairy tales and historical novels. Locals refer to the park as “Toppari”. The park area was designated for recreational use in the town plan of 1906.

Topelius Park is one of the few architecturally formal gardens in Helsinki, forming a green axle between two public buildings: a church and a library. The park consists of two parts, a natural area and a geometrical park with two successive rectangular sections and a horseshoe-shaped section at the end. The rectangular sections are lined along their entire length by narrower rectangles where the trees and shrubs are positioned less formally.

In the southern section of the park is Töölö Church designed in the Neoclassical style of the 1920s by Hilding Ekelund (1893–1984). In recent years the church has also attracted attention for the eagle owl in its tower! The church is elevated well above the level of the park above a semi-circular slope that is adorned by poplars. At the bottom of the slope is the formal garden known as the horseshoe, which features geometrically trimmed hedges, hemispherical hawthorn trees and square flowerbeds of roses. The fenced play area is oval in shape and has new playground equipment.

The section of the park by Sibeliuksenkatu street features cylindrically trimmed white willows. The playing field in the centre section of the park is lined by rose shrubs and is ideal for playing pétanque, for example. The paths are lined by carefully arranged plants, including scarlet and black hawthorn, cherry trees and Douglas firs.

At the opposite end of the park is Töölö Library, which was designed in the Modernist style by Aarne Ervi (1910–1977) and completed in 1970. The plants on the gentle slope in front of the library are arranged less formally in the landscape style. Each summer cannas, which feature large leaves and red flowers, are planted in the basin next to the library; the plants spend the winters in the greenhouses at the City Garden. The paths at the northern end of the park wind their way beneath the trees and merge impressively with the natural landscape of Sibelius Park.

In front of the library is a sculpture by Kari Juva (1939–) entitled The Reading Room, which was unveiled in 1972. The sculpture comprises two stylised female figures, representing visitors to the library who meet by chance and who share a love for reading. Kari Juva was praised for the work’s plasticity and the combination of movement with the massive volumes. The sculpture was the winning entry in a competition organised in the late 1960s to design public art for the entrance to the new library. The sculpture is cast in bronze and it rests on a black granite pedestal.

The large lindens along Topeliuksenkatu street were planted in the 1930s and create a soft border to the park, forming a space where you can walk between two different park styles and enjoy the roses and special trees. Children can play safely in the fenced playing area. And you may indeed hear the hoots of the eagle owl from the church tower, as it is kept well fed thanks to the wild rabbits that live in the park. 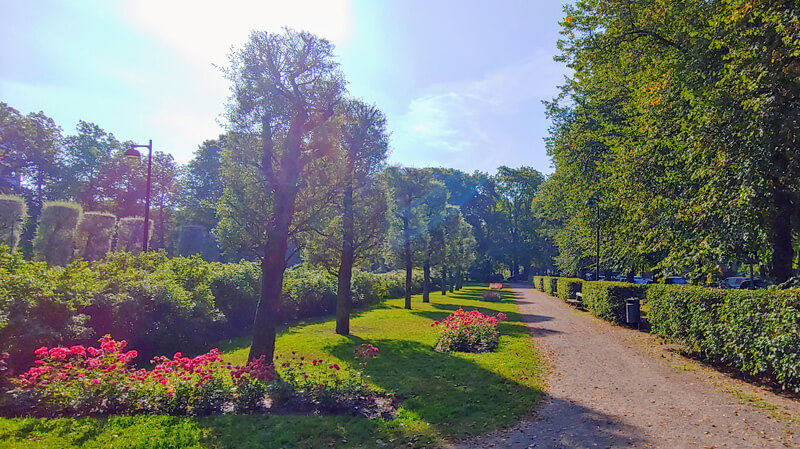 Antti Honkala
To previous page
To next page