Sibelius Park is situated on the grounds of three former villas named Bråvalla, Kinnekulle and Miramar. The area was designated as a residential area in the town plan of 1906 but changed to a recreational area in the revised town plan of 1916. Further revisions in 1929 allowed Mechelininkatu street to cut across the park.

Known among locals as “Sibbari”, Sibelius Park is based an informal English-style landscape garden adapted to the typically Finnish shoreline environment. Construction of the park began in 1937 and lasted three years. The park was originally called Humallahden luonnonpuisto (Humallahti Nature Park) after the name of the adjacent bay. It was also referred to as Kinnekullan puisto (Kinnekulla Puisto) after the name of one of the former villas. The park was renamed in honour of legendary Finnish composer Jean Sibelius (1865–1957) in 1945 on his 80th birthday.

City gardeners Emil Aranko and Bengt Schalin were responsible for the design of the park, which mainly entailed additional plantings. A pond and fountain were also built, and the shoreline was filled in to make it accessible to pedestrians. The birch grove in the park has been widely admired. Contrary to custom at the time, visitors were allowed to walk on the lawns, where lilies of the valley and daffodils were also planted. In this way the original natural landscape was developed into a popular landscape park bearing the name of Finland’s national composer.

Two sculptures can be found in the park. In 1939 the Leo and Regina Wainstein Foundation organised a competition for a sculpture with a Kalevala theme to be erected in Helsinki. The competition was won by Aarre Aaltonen (1889–1980) with his entry Ilmatar and the Scaup, and it was decided that the bronze piece would be placed in what became Sibelius Park. The sculpture was unveiled in 1946.

The Sibelius Monument was the result of a two-staged competition was then arranged by the Sibelius Society, founded in 1957, for a memorial to the composer. The second stage was won by Eila Hiltunen’s entry Passio Musicae. The competition gained immense publicity; the conflict between the supporters of abstract and figurative art was in the air, but it was solved by adding Sibelius’ bust to Hiltunen’s work. The work is made unique by its spatial diversity of the work, allowing the viewer to enter it, and the echoes and sounds generated by the structure. Viewed from further away, its form blends in with the woods and rugged rocks. The Sibelius Monument was inaugurated on 7 September 1967 and is today one of the most popular tourist attractions in Helsinki. The work is made of acid-resistant steel and measures 8.5 metres in height, 10.5 metres in length, and 6.5 metres in depth. It consists of over 600 tubes and weighs 24 tonnes.

In 1983, to mark the 60th birthday of President Mauno Koivisto (1923–2017), 60 birch trees were planted at the corner of Mechelininkatu and Kesäkatu. Although many of the trees have since died, the aim is to add new ones through micropropagation of the original silver birches. 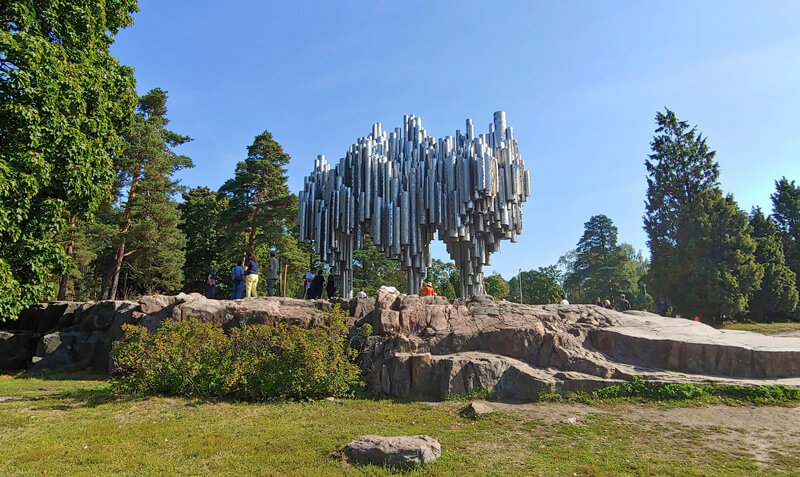