The local park beneath the Roihuvuori water tower, a sunny slope with a lawn and trees, began to evolve into a Japanese inspired cherry park when the first 52 cherry trees were planted there on World Environment Day in 2007. By 2009 there were 152 cherry trees. The pink blossomed ornamental cherry trees Prunus sargentii have since thrived well in the park.

It all began around 2005 when the Public Works Department received a proposal from local entrepreneur Norio Tomida regarding the creation of a cherry orchard. The idea was that the Japanese community in Helsinki would donate cherry trees to the city as a sign of gratitude for what a good place Helsinki is to live in. Inspired by Norio Tomida, Japanese residents throughout Finland joined in to donate the trees.

Kaisu Ilonen from the Public Works Department selected the local park in Roihuvuori as the location due to its sunny slopes that would suit the cherry trees. The nearby location of another Japanese inspired park just 700 metres away was another advantage. The “Good Things Grow in Helsinki” movement of the Publics Work Department liked the idea and began also to look for corporate sponsors who would be interested in helping to cover the costs of establishing and maintaining the park. Four companies connected with Japan joined the project.

Thanks to the co-operation between local Japanese residents, corporate sponsors and the City of Helsinki, the cherry trees were planted by the end of 2009. Locals and visitors alike can now admire the Cherry park and spend time with their Japanese friends during the annual Hanami cherry blossom festival in springtime.

At the same time as the cherry trees were planted, the lighting and paths were renewed, and in the coming years water features may be added. The ditch along the local street Sahaajankatu has already been renovated, and it could easily be expanded into an iris pond at the bottom of the park, adding to the Japanese theme of the garden.

The upper slate-paved level of the park features Japanese benches and a plaque with the names of the donators. A path leads from the upper tree section to the nearby Japan inspired garden. Other cherry tree varieties may one day be planted along the path. Each year local residents plant an extra cherry tree in honour of the local citizen of the year, so these trees are becoming an identifying feature of this neighbourhood.

Hanami, which translates as “flower viewing”, is the biggest annual festival in Japan. The festival takes place when the cherry trees are in blossom, so the exact dates vary each year according to weather conditions. The progress of the blossoming is followed enthusiastically by the Japanese media. When the flowers are in full bloom, the Japanese people flock to the trees to admire the “sakura”.

The first Hanami festival in Helsinki – and probably the northernmost in the world – was held at the cherry orchard in Roihuvuori on Mother’s Day, 11 May 2008. Japanese associations in Helsinki and the local community association helped organise the event. Around 300 people attended the event in the first year; by 2012 the number was in the thousands. The Hanami Festival has become a popular new tradition where local Finnish and Japanese residents can gather and share the experience thanks to Norio Toimida and the active locals in Roihuvuori. You can sign up for news about the Hamani Festival on the website www.roihuvuori.fi/hanami.

Renovation elevated the park to a level of its worth

Thanks to the popularity of the park, there was a desire to renovate it to enhance its Japanese style and improve its potential as an event venue. A flower viewing festival – hanami – organised by Roihuvuoriseura society brings in up to 30,000 visitors to the park. During the entire blooming season, the park is filled with flower fans enjoying a picnic.

The renovation, completed in 2020–2022, gave this beloved park a distinctive appearance reminiscent of Japanese style and made it into an even better venue for holding events. The event field was reshaped and equipped with electric outlets. The entire bumpy grass field was also renewed.

The stream in the south-eastern part of the park was widened and a dam was set up to create a beautiful, pond-like water surface with planted vegetation. Additionally, the dam will help improve the quality of water flowing into the sea. These changes will also prevent flooding on Abraham Wetterintie.

The new planted vegetation enhances the park’s Japanese atmosphere. In total, 90 cherry trees, walnut trees and firs of different species were planted close to the water area. Furthermore, 2,800 different iris flowers were planted in the iris garden near the pond. Come springtime, the blossoming cherry trees will be accompanied by 70,000 various flowers grown from bulbs.

The main entrance at the corner of Sahaajankatu and Abraham Wetterintie was given a beautiful gate and a new plaza with planted greenery. Two solid wooden bridges, the new pier at the beach and picnic tables make the park an even more comfortable area for recreation. The renovation works cost slightly over €2 million. The renovation was designed by landscape architecture agency Näkymä Oy. The construction work was carried out by the Helsinki City Construction Services, STARA.

The park’s renovation was celebrated on Arbor Day, 27 September 2022. Deputy Mayor Daniel Sazanov planted a tree during the festivities to honour children born in 2022. The tradition of planting a tree for children was started based on a council initiative in 2021, when a maple tree for children born in 2021 was planted in Kalasatamanpuisto Park (article in Finnish). The children of 2022 were assigned a North Japanese hill cherry, Rancho variety. The planted tree was watered by children from Roihuvuori. 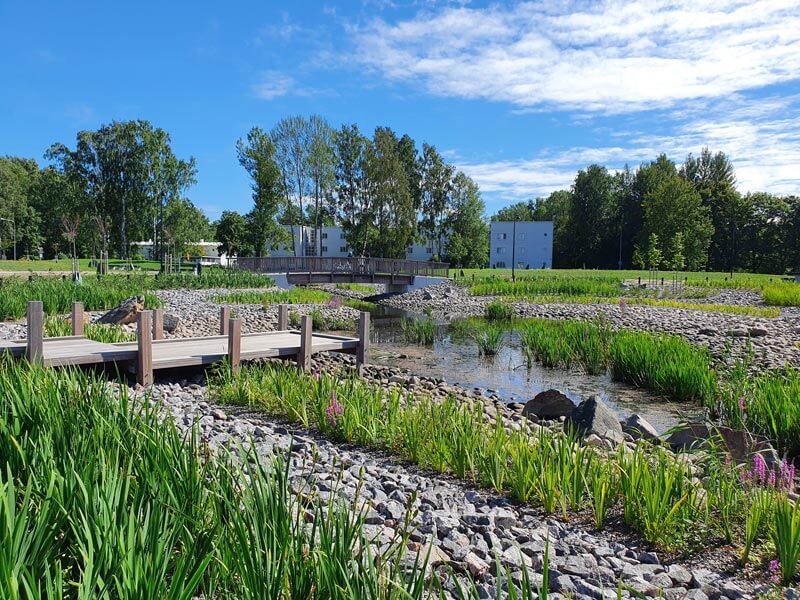 The main entrance at the corner of Sahaajankatu and Abraham Wetterintie

Services pier at the beach, picnic tables and electricity for event use

Näkymä Oy
To previous page
To next page