The City of Helsinki has its own secret garden at the northern end of Töölönlahti. The Rose Garden is a fenced park that is locked overnight, while the Winter Garden is a popular year-round attraction that is free of charge to visitors. Behind the Winter Garden are the greenhouses, which cultivate summer flowers for the city parks and are closed to the public. The Stara Gardening Services Department and the Eläintarha Maintenance Department both operate in the City Garden.

History of the area

Henrik Borgström, the man behind Kaivopuisto, founded the Finska Trädgårdsförening (Finnish Garden Association) in 1881 to continue the operations of his park company. The purpose of the association was to introduce proper training for gardeners in Finland. The association had a two-year gardening school, greenhouses and nursery on the site of today’s City Garden. The city provided the association with an annual grant of 1000 markka for ten years, as well as land that it leased to the association.

Borgström was succeeded as chairman of the association by his son-in-law and business partner Jakob Julius af Lindfors (1831–1903). In 1906 the association ran into financial difficulties after the annual grant was discontinued and its patron Lindfors passed away. The city subsequently claimed the land that had previously been leased to the association in the Eläintarha area, including the school, greenhouses and nursery, for the sum of FIM 58,000 . The city’s own greenhouses had previously been located in what is today the Tehtaanpuisto park, and they were transferred to Eläintarha in 1908.

In summertime the upper terrace is adorned by summer flowers and potted plants. Old and new shrub rose varieties come into bloom around July and can flower well into the autumn. Altogether there are around 3000 roses in the garden. In front of the Winter Garden is a small summer café that affords a pleasant view to the Rose Garden and the Töölönlahti bay beyond.

A bust of Jakob Julius af Lindfors by Walter Runeberg (1838–1920) stands in a prominent place in front of the Winter Garden. Lindfors financed the construction of the Winter Garden. His holdings in Fiskars and Suomen Höyrylaiva Osakeyhtiö, a steamship company, provided him with the means to sponsor culture generously. As the chairman of the Finnish Society of Crafts and Design, he also played an important role in the promotion of Finnish culture, as did his father-in-law Henrik Borgström.

Whereas the greenhouses at Kaisaniemi have a classical symmetrical design, the Winter Garden is asymmetrical. It consists of two greenhouses, one of which is tall north-south hall with three naves while the other is lower and more traditional, with a long façade facing south. The supporting structures are cast iron, and the roof is supported by typical arch supports and circular roof trusses. The glazing in the roof is straight to avoid the structural problems associated with double glazing and curvatures.

The romantic fresco on the back wall of the central hall was painted by Salomo Wuorio (1857–1938), who studied and worked in Stockholm from 1881 to 1886, returned to Finland in 1887 and opened his own business in Helsinki in 1890. The wall was whitewashed in 1907 when the Winter Garden transferred to the City of Helsinki; apparently it was felt that the fresco did not suit the geometric garden style that dominated in the early 1900s. The fresco was found during renovation work in 1977 and subsequently restored.

The City of Helsinki immediately began renovating the Winter Garden in the early 1900s. The original stream and waterfalls were replaced by a concrete pool and fountain. Flower tables were added to the side rooms. The old plants were sold at auction replaced by new plants from Belgium and the city’s own greenhouses in the Tehtaanpuisto park. In 1908 the city began moving its garden from Tehtaanpuisto to Eläintarha.

The original greenhouses from Tehtaanpuisto were retained and used to house tall palms, Dracaenas and laurels, as well as to cultivate seedlings for all the flowers. The cactus collection was very impressive, and cactus plants were also used in city parks, including around the Runeberg statue.

A major renovation of the Winter Garden was carried out from 1975 to 1978, when the rusty window frames were repaired. The main structure was still sturdy for the most part, and reinforcements were welded into place where needed. During this renovation the original fresco by Salomo Wuorio was uncovered and restored by Fjalar Hermansson.

New renovations were carried out in summer 1999 costing FIM 2 million (approx. EUR 340,000). The roofs in the central section and western wing were renewed, the walls were painted, and around half of the plants were replaced by new ones. The surrounding trees were also trimmed and in some cases removed to prevent their branches from damaging the glass structure. For the first time in a hundred years, all of the plant soil in the Winter Garden was replaced.

The most valuable plants in the Winter Garden include a camellia tree that was just one and a half metres tall when it was moved from Aurora Karamzin’s villa in 1917. In 1893 the central hall, i.e. the “cold room”, housed coniferous trees, myrtle trees and laurels, while the western wing housed tropical plants. In 1948 the central hall had around 700 plants, while the western wing had around 400 palms, clivias and aspidistras (the number of species was quite limited). The eastern wing housed the cactus collection, including around a hundred different species and varieties, with a total of around 2600 plants. The wrought iron furniture in the palm room was modelled on the furniture in Aurora Karamzin’s villa.

The latest and arguably most comprehensive renovation was carried out over a period of one and a half years from 2010 to 2012. The Winter Garden reopened to the public on 9 February 2012. Major reinforcements were made to the structures. The condition of the building had deteriorated for years due to water and the resulting corrosion on the metal structures. The steel columns that supported the glass roof were badly rusted, so they had to be cut from the base and new supports added. Thousands of windowpanes were replaced, and the metal structures were reinforced to last the next decades. The toilet facilities were also renewed and made wheelchair accessible.

Many of the most popular plants at the Winter Garden were spared during the renovation, including one of Aurora Karamzin’s camellia trees. Most of the cactus varieties too are still intact. The plants were evacuated to the City Garden during the work. The new garden plan was made by Katja Uski, Head Gardener at Gardenia.

Today the Winter Garden houses over 200 different plants, mainly from the Mediterranean region. The plants were selected for their aesthetic appeal and for historical interest rather than for scientific reasons. The palm room holds not only palms but also island pines and the one remaining camellia tree, which is thought to be among the oldest in Finland. The western wing houses dwarf palms, a cycad and a magnificent Magnolia grandiflora, as well as historical houseplants. The cactus room is a realm of succulent plants and cacti. Around Christmas time, azaleas, tulips, amaryllises, hyacinths and lilies of the valley are all in bloom. Easter is the time of daffodils and tulips.

The Winter Garden continues to be a popular attraction among residents and tourists alike. It has been voted the best tourist attraction in Helsinki, and people like to visit many times a year to enjoy the seasonal flowers and decorations.

Would you like to have a guided tour of  the Wintergarden?

Do you need a guide to the Witergarden? You can e-mail our authorized Helsinki guides. They can guide in several languages, talvipuutarha@helsinkiguides.fi.

The City Garden behind the Winter Garden has six heated greenhouses covering an area of 3020 square metres, as well as 16 plastic greenhouses covering an area of 1500 square metres. The greenhouses are used to force 45,000 tulips and other bulbs, as well as to supply 140,000 bulbs for spring planting. Each year around 200,000 summer flowers are cultivated for the city’s flowerbeds. For special occasions and official city functions, there are 30 laurel trees and palms, as well as around a hundred other plants. Two florists are in charge of the city’s public decorations.

Buildings in the City Garden

Villa Jyränkö dates back to 1909 and is now used for meetings and banquets. The two-storey stone villa was designed in the National Romantic style by City Architect Karl Hård af Segerstad. It was originally built as the City Gardener’s residence. It has also served as the mayor’s residence and as an allergy clinic. The villa is named after its last resident Pekka Jyränkö, who was City Gardener from 1979 to 1995.

The yellow building was designed by Theodor Decker (1838–1899). The wooden building from the turn of the century is now used as offices. The red café was moved from Hesperia Park in 1924.

Before the First World War a bird house was built out of cement bricks. The house had a large pond for birds and was kept heated in wintertime. Beneath the house is a cellar for storing decorative plants over the winter. Swans from the Töölönlahti bay and other birds from the Alppipuisto park were brought to the house during the cold season. To keep the swans from flying away, one of their wings was broken. These days birds come to Töölönlahti and Alppipuisto voluntarily, and the bird house has been turned into a conference space. All of the wooden buildings in the area were renovated in 1980. 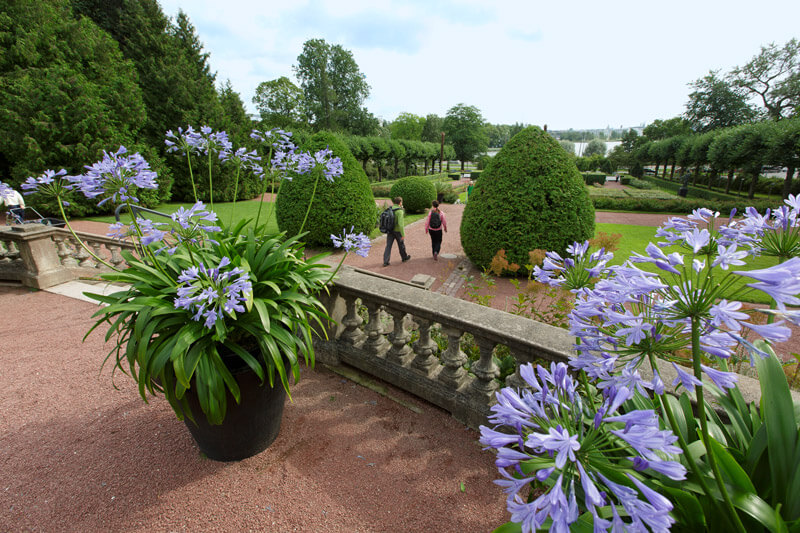