As its name suggests, Aarrepuisto is a real treasure that is unequalled in Helsinki. When walking from the Mellunmäki metro station, cross Aarteenetsijänsilta “treasure bridge” over the street Länsimäentie and the park is to the left between the streets Aarteenetsijäntie and Aarteenetsijänkuja. It is bordered along both sides by apartment buildings that were built in the 1980s. The outstanding feature of the park is the Mellunkylänpuro creek that flows through the canyon-like terrain. The pleasant sound of the water as it runs down the small rapids spreads throughout the park.

The park was created out of a natural forest in 1993, when a network of paths and five wooden bridges across the creek were built. However, the original spruce forest suffered from all the construction work around it, and the park soon fell into disrepair and became dark and gloomy.

With the support of the EU’s Urban II programme, the decision was taken in the 2000s to renovate the park into a more diverse and attractive green area that would be a real gem in the neighbourhood. The main objective of the Urban II programme is to enhance the quality of life in cities by improving the local environment with the active participation of local residents. In this regard “Treasure Park” has been a big success, as it has become a unique attraction in East Helsinki. The 600,000-euro investment was certainly worth it.

The inspiration behind the new design insofar as the plants were concerned was very much Bengt Schalin, City Gardener from 1946 to 1957. Schalin loved to experiment with plants, highlighting their colours through all the different shades of the flowers in bloom, the autumn foliage and the different types of leaves. He is also to thank for many of the rare plants that can be found in Helsinki’s parks.

In the middle of the park is a recreational area with stone steps leading down to the valley and a pond formed by the creek. There is also a long stone wall for sitting on that supports the flowerbeds of perennials on the steep slope. The lighting and furniture in the park have been renewed, and some of the plants are highlighted by spotlights.

It is fun to watch the water flowing under the wooden bridges. The banks of the creek are lined with rocks and reinforced with plants, making it easy to get down to the creek to play with toy boats, for example. The water level in the creek can be adjusted by means of a submerged weir.

The park is divided into sections with decorative shrubs, exotic evergreens and deciduous trees, and perennials and ferns. The park is in flower from spring to autumn, when visitors can also enjoy the rich and colourful foliage. In wintertime the creek partially freezes, creating an idyllic appearance.

The invasive species Impatiens glandulifera threatens to spread in the park, but fortunately local residents and park pals have actively helped remove these unwanted plants. 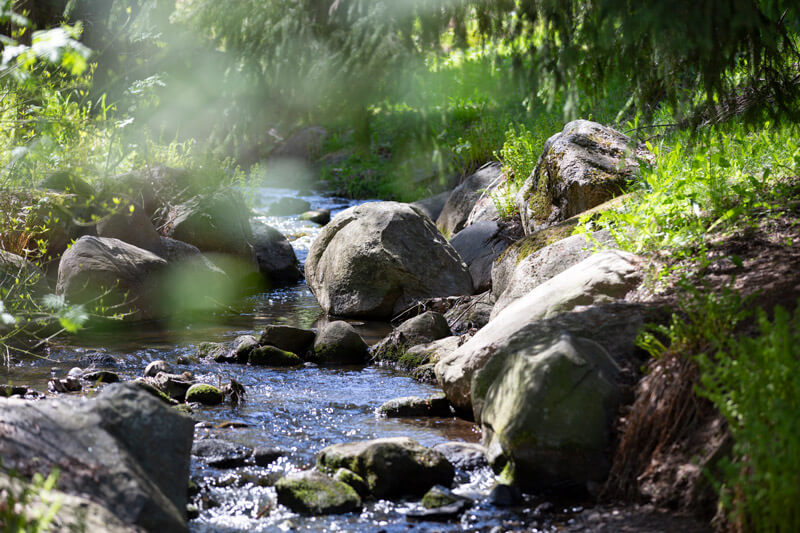 Marja Väänänen
To previous page
To next page