Mustankivi Park is one of the most peculiar parks in Helsinki. Its name in Finnish refers to the “black stone” typically found in Vuosaari, gabbro.

The park is an old gravel pit and emergency groundwater area. If the Päijänne Tunnel, the main source of water for Helsinki, is closed for any reason, water can be taken from Mustankivi Park. Special care had to be taken when constructing the park to prevent pollution to the groundwater. There is also a cone shaped object in the park that serves as an emergency drain in case of flooding. When entering the park from the end nearest the metro, you come across a delightful area of perennials that spreads out like an amphitheatre. This is one of the largest perennial gardens in Helsinki. Something is always in bloom from spring through to autumn, beginning with the cherry trees and followed by the daylilies. In the autumn the perennial phlox (Phlox paniculata) shows off its colours. Annual summer flowers and roses add to the overall effect.

In the square in front of the flower garden is a metal sculpture by landscape architect Marja Mikkola (1955–) entitled “Leaf”. The sculpture is illuminated at night, and water falls from the leaf into the pool below. Beyond the low sitting wall, an unreal landscape opens up with mystical rock formations somewhat reminiscent of the Scottish moors. This valley is lined by maples, ashes, oaks and red oak trees. Among them are also flowering shrubs, such as lilacs and honeysuckles, as well as flowering trees, including rowans, cherry trees and crabapple trees.

Mustankivi Park is the largest land art park in Helsinki and all of Finland. Students from the Academy of Fine Arts submitted design proposals for the park, and Harvest by Anu Kiiskinen (1964–) was selected. According to the artist, the first time she came to the park the current play park was under a 10-metre pile of rocks, and sand and stones were everywhere. This gave her the idea to form them into ornamental pieces and eternal natural shapes, such as spirals, which have fascinated man since the Stone Age.

By using and arranging natural ramps, different sized stones and special grasses, the artist created meandering forms across the terrain. The clam-shaped square in the centre of the park features rock formations that rise up from the ground. The stones were set in cement and have held up well, but the grassy knolls had to be redesigned to withstand the heavy wear, especially from sledding in wintertime. The centre of the park has lots of open space for different activities. The surrounding residential buildings and the park fit together well, and a view to the open sea has been retained in the northern end of the park.

Mustakivi Play Park is situated on the west side of the park. A path and tree-lined alley run along the western edge leading to a small square featuring another sculpture by Anu Kiiskinen entitled Yesterday, Today, Tomorrow. Another east-west path runs past the northern end of the play park. The play park’s building is at the other end next to a paved open area and paddling pool. There is lots of playground equipment, including a pirate ship built by the City of Helsinki’s workshop. The oak trees in the corners of the square provide shade and protection. At the southern end of the park, close to the play park, is a skating rink and playing field surrounded by embankments and planted trees.

The park opened to the public in autumn 2002. A school, daycare centre and youth centre are situated beside the park. Connecting paths to other parts of Vuosaari also pass through the park. 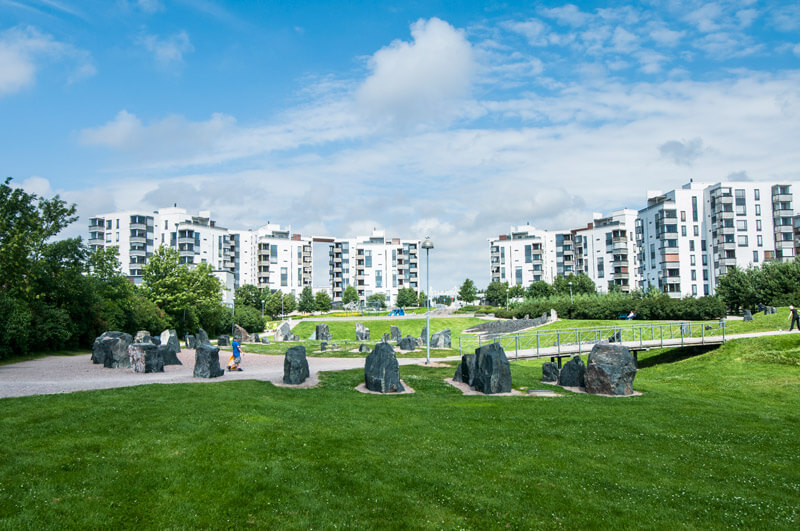 Hemmo Rättyä, ”Harvest” by Anu Kiiskinen
To previous page
To next page