The peak blooming season for both the rhododendrons and the azaleas is early June. The azaleas bloom first and sometimes longer than the rhododendrons, even after midsummer. The splendour of the flowers varies with each year; generally a good year is followed by a more modest one.

Pine trees create a canopy for the flowering plants. Thousands of Helsinki residents and gardening enthusiasts visit the park each year to witness the spectacle.

The oldest rhododendrons were planted in 1975, when a research garden for the University of Helsinki’s plant breeding programme was established together with the Public Works Department. Pekka Jyränkö, City Gardener from 1975 to 1995, was among the main drivers behind the project. Rhododendrons prefer acidic soil and so were planted in a natural marsh area. Paths were also constructed. The University of Helsinki and the City of Helsinki originally planted 3000 rhododendron hybrids for research purposes. The aim of the plant breeding programme was to create varieties that were suitable for the Finnish climate and diverse in terms of their growth and the colours of their flowers.

Rhodendron Park is the only park in Helsinki that has special viewing platforms for admiring the exotic flowers. The viewing platform in the rhododendron section is shaped like a bridge, allowing visitors to admire fully the flowers of the tall plants. There are also boardwalks through the park that are fully accessible by wheelchair. The park’s structures and signposting were renewed in 2009. All the signs are now in Finnish, Swedish and English.

Following long-term observation, over a dozen rhododendron varieties that grow in Finland have been selected for commercial production. Rhododendron Park supplied eight of these: ‘Haaga’, ‘Helsinki University’, ‘St. Michel’, ‘P.M.A. Tigerstedt’, ‘Axel Tigerstedt’, ‘Pekka’, ‘Eino’ and ‘Mauritz’. The original plants continue to grow in the park. The observation of older rhododendrons has now concluded, and the research area now serves as a public park.

‘Haaga’ was named after the district in which Rhododendron Park can be found. This variety grows to a height of 1.5 to 2 metres and is roughly circular. In the centre of the pink flowers are darker spots that give them a stronger red appearance.

‘Pekka’ was named after Pekka Jyränkö, City Gardener from 1975 to 1995. This variety grows almost like a tree in broad bushes that are ideal for public areas and large gardens.

‘P.M.A. Tigerstedt’ was named after Peter Tigerstedt, Professor Emeritus at the University of Helsinki and founder of the rhododendron breeding programme. This variety grows to a height of over two metres and generally produces many flowers. The white flowers have reddish brown spots in the centre.

In spring 1996 Rhododendron Park was extended to the north of the cycle path. Thousands of new yellow rhododendrons and many park azaleas were planted in the new section. The azaleas were the result of an azalea breeding programme that began in 1986.

These plants are also part of a larger crossbreeding selection. Altogether around 1500 park azaleas grow in the azalea section. The yellow rhododendrons bloom early, often in the first days of June at the same time as the first yellow azaleas begin to flower.

The aim of the azalea breeding programme has been to breed varieties that can withstand the cold winters. The plants are also observed to study how they grow, their size, their flowers and their autumn colouring. The first domestic park azalea varieties were introduced to the market in 2010.

Yellow is a particularly popular colour for rhododendrons, but so far winter hardy varieties have been lacking. The yellow rhododendrons bloom in early June with large pale yellow and greenish yellow flowers.

In 2010 a new woodland garden was added to the azalea section of Rhododendron Park. Various hortensia shrubs (Hortensia spp.), azaleas and other flowering shade shrubs that were selected for the new section.

Finland is home to two native varieties of rhododendron. Rhododendron lapponicum is very rare and found in the fells of Lapland, while Rhododendron tomentosum thrives in bogs and marshes and has branches that emit a strong scent. Rhododendron tomentosum grows naturally along the edges of Rhododendron Park and attracts especially foreign rhododendron enthusiasts. This variety also thrives as a garden plant, and it was once used in homes to keep away bugs and keep the linen fresh smelling. It was also said that when worn around the neck it helped keep churchgoers awake during the service.

How do azaleas differ from rhododendrons?

When Finns talk about rhododendrons, they are usually referring to evergreen park rhododendrons with blue-violet flowers (Rhododendron catawbiense) or one of its varieties with red or white flowers. Few remember that the name rhododendron refers to an entire genus of almost 900 species, which include deciduous azaleas. In addition, almost 5000 shrub-like rhododendron breeds have been registered.

Rhododendrons flourish in the eastern parts of the Himalayan mountains, as well as in the mountains of Indochina, Korea, Japan and Taiwan. Several varieties are also native to North America and Europe. Some tropical varieties grow as far south as Borneo and New Guinea, but they do not grow in Africa or South America.

Since the majority of rhododendron varieties are native to mountainous regions that receive heavy rainfall, they require large quantities of water to flourish. Rhododendrons thrive in acidic, organic and spongy soil. The fine roots are very close to the surface and cover a small area, so they are easily damaged.

Rhododendrons are mycorrhiza plants, meaning that they have fungal roots. The symbiotic fungus accounts largely for the plant’s nutrition, especially phosphorous. Mycorrhiza plants are very resilient to droughts and diseases. They require very little fertiliser. If chemical fertiliser is used that is too strong, it can impair the fungus and be harmful to the plant over the long term. Only chlorine-free fertilisers should be used on rhododendrons.

The roots are protected from drying and from the heat by the forest undergrowth. However, the undergrowth must not be too strong or have too many roots so as not to compete with the roots of the rhododendrons.

Rhododendrons generally require tree cover to protect the leaves from excessive sunlight and wind. The trees providing the cover should have deep roots so that they do not compete with the rhododendrons. Too much shade should also be avoided. The ideal solution is to have shade the moves throughout the day.

Rhododendron branches are fragile and break easily. However, they cope well with trimming. The branches have dormant buds that can begin to grow when cut. They may also form new shoots at their base.

Rhododendrons can produce seedlings. The flowers on the seedlings in Rhododendron Park can be any colour. The method of growing them also varies. Seedlings under 0.5 metres in height can be transferred with their root system during the off season. The flowering branches then form during the late summer and early autumn.

You can learn more about rhododendrons in Finland on the website of the Finnish Rhododendron Society. 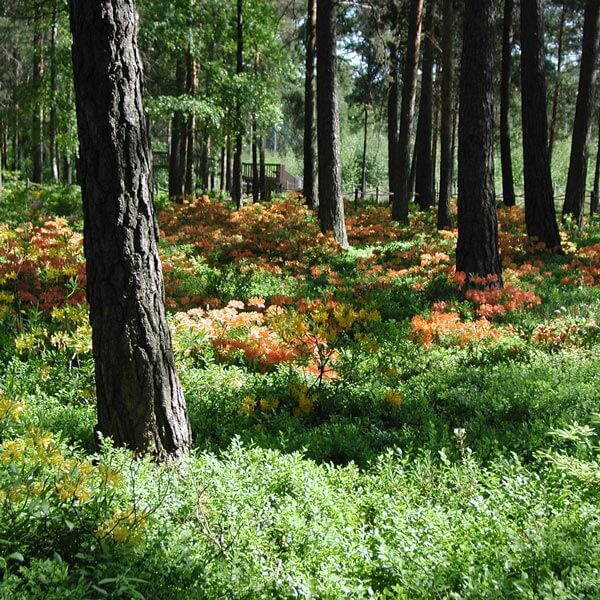 Design Public Works Department and University of Helsinki, 1975 and 1996