“Observatory Hill Park” was the first municipal park in the early 1900s. With its excellent views to the sea, the high hill had been part of the natural line of lookout points in ancient times. Signal fires were once burned atop this and other hills along the coast. The last signal fires were burned atop Observatory Hill during the Greater Wrath (Isoviha) in the 1700s.

The rocky ridge also formed part of the fortification line designed by Augustin Ehrensvärd (1710–1772) and that also included Viapori (Suomenlinna). In 1748–1750 a small fortress was built atop the hill and named Ulrikasborg (“Ulrika Fortress”) after Swedish Queen Ulrika Eleonora who ruled for just one full year (1719) before abdicating the thrown to her husband Frederick. This is where the district of Ullanlinna (Ulrikasborg in Swedish) gets its name. The fortress was dismantled during the Finnish War (1808–1809) and its stones used to help rebuild Helsinki after the Great Fire of 1808.

When Johan Albrecht Ehrenström (1762–1847) and Carl Ludvig Engel (1778–1840) set about redesigning Helsinki, they couldn’t help notice the prominent position of the former fortress hill. In the city plan of 1812 they drew a main avenue (Unioninkatu) stretching from the top of the hill to the north. Engel even played with the idea of building an imperial palace atop the hill. However, after the former capital Turku was destroyed by fire in 1827, a new location was needed for the Royal Academy (now the University of Helsinki) and a new observatory was built atop the hill in the 1830s. Gradually the hill became known among locals as Observatorioberget (“Observatory Hill”), and the Finnish name “Tähtitorninvuori” (or “Tähtitorninmäki” as it is more commonly known) became established in the early 1900s.

Observatory Hill was originally a barren outcrop of rock, and in the 1860s a movement began to do something about the matter. The renowned Swedish garden architect Knut Forsberg (1827–1875) was invited to come up with a solution. At the same time Forsberg designed Kaisaniemi Park.

According to Forsberg’s design, the slopes of the hill were to be terraced to create an amphitheatre effect overlooking the villas to the south. This part of the design was realised in 1868 as part of a public building project to provide work during the famine year. Soil was brought in by horse and cart to cover the bare rock. The construction project was financed by fundraising events and the proceeds from the sale of alcohol.

In 1889 the rapidly growing city hired Svante Olsson (1856–1941) from Sweden to be its first regular City Gardener. Olsson began by completing the design of Observatory Hill Park. His plans were based on the German model of a city park with winding paths, large and uncluttered lawns, terraced terrain and precisely laid arrangements of trees and shrubs. The resulting park was enthusiastically received. It was mentioned in travel guides and local descriptions for its splendid views, and it was often painted and photographed. It was even described as Svante Olsson’s crowning achievement.

When the Royal Academy moved from Turku to Helsinki by order of Tsar Nicholas I (1796–1855), the department of astronomy also moved to the new capital. Professor of Astronomy F. G. W. Argelander (1799–1875) found a suitable location for the new observatory atop Ulrikasborg.

The observatory was designed by Carl Ludvig Engel together with Professor Argelander and completed in 1834. At the time it represented a state-of-the-art facility and served as the model for many other observatories in Europe. Fortunately all the faculty’s books and equipment were saved from the Great Fire of Turku and transported safely to Helsinki. In 1890 a tower for the double refractor (photographic telescope) was completed in the observatory’s garden. The handsome tower was designed by architect Gustaf Nyström (1856–1917) and served as a stimulus for creating a public park around the observatory.

The most impressive monument in the park is The Shipwrecked by Robert Stigell (1852–1907). The sculpture depicts a shipwrecked family, but from the moment it was unveiled on 18 November 1898 it was interpreted also politically. Finland at the time was suffering under Russian oppression, and the fact that the memorial was positioned facing not the sea but the West was interpreted symbolically as a cry for help. The sculpture was the first public monument in Helsinki that was not a memorial for a particular individual or event. Stigell himself claimed he was merely interested in exploring the sculptural dynamics of the subject. He offered it to the city as a public monument, and a committee decided to place it in Observatory Hill Park, as Stigell himself had requested.

In 1925 the art dealer Gösta Stenman (1888–1947) donated a beautiful marble sculpture entitled Wader by Wäinö Aaltonen for the pond in the park. Unfortunately, the work suffered from vandalism and was removed for conservation work. In 1994 it was placed in the Rikhardinkatu library. On 21 June 2008, Helsinki Day, a new red granite sculpture was placed by the pond, Torso by Marjo Lahtinen (1944–).

The most moving monument in the park is Hands Begging for Mercy, a memorial to Jewish refugees by Rafael Wardi (1928–) and Nils Haukeland (1957–) that was unveiled in 2000. During the turmoil of the Second World War, Finland surrendered eight Jewish refugees to the Germans, including children. On 6 November 1942 the refugees were taken on the s/s Hohenhörn from Helsinki to Tallinn and eventually to the concentration camp in Auschwitz. Only one of the eight is known to have survived; the others perished in the camp. The memorial was placed near the location from where the Hohenhörn sailed.

The monument is rich in Jewish symbolism and consists of a slab of light Ylämaa granite some two metres in length and one in height with a bronze plaque resting against the slab. Raised hands begging for mercy are depicted in high relief on the plaque. On the other side of the slab there is a reflecting stainless steel plate. The names of the refugees and an explanation of their fate are inscribed onto the monument in Finnish, Swedish and Hebrew. The monument is surrounded by paving stones in the form of a hand, symbolising how the memory of the victims is being held onto.

Observatory Hill Park is known for its wide range of interesting plants. Although the variety of plants has somewhat lessened over the decades, the park is still exceptionally rich in plant life. Almost a hundred species of trees and shrubs grow in the park, as well as many perennials. The park is adorned by Hungarian lilacs (Syringa josikaea), Camperdown elms, poplars, oaks, hawthorns (Crataegus), honeysuckles (Lonicera), mock-orange (Philadelphus) and shrub roses. In the northeast corner of the park is a splendid grouping of ten old crabapple trees. A giant leaning Ornäs birch (Betula pendula ‘Dalecarlica’), the most impressive of all the trees in the park, unfortunately had to be removed due to rot, but two new Ornäs birch trees have been planted nearby.

One of the most striking trees in the park is the Berlin poplar (Populus berolinensis), not because of its rarity but because of its huge size. The circumference of the double trunk is 5.5 metres and the height 30 metres (in 2012). This tree can be found close to the observatory and serves as a landmark that can be seen from far away. Unfortunately, the tree is in rather poor condition.

Among the rare deciduous trees is a Crimean linden (Tilia x euchlora) and the even rarer harlequin ash (Fraxinus pennsylvanica ‘Variegata’) in the southwest corner of the park. This is now the only harlequin ash in Helsinki and possibly all of Finland after the specimen in the University of Helsinki’s Botanic Gardens had to be cut down.

The coniferous trees in Observatory Hill Park grow primarily in the northwest corner and include Douglas firs, larch trees and Swiss pines. A Yoshino cherry tree (Prunus × yedoensis) has been planted alongside the road up to the observatory, and the only maidenhair tree (Ginkgo biloba) in the city centre can be found growing by the walls of the observatory. The maidenhair tree is an ancient tree species, a living fossil with no close living relatives. Fossils of the tree have been found dating back over 200 million years. Many examples can be found across the Gulf of Finland in Tallinn. Various magnolias and cherry trees were planted for experimental purposes between 2007 and 2009.

Many flowering shrubs can be found in the park, including a wide range of lilacs. Some old shrub roses have also been preserved. In addition, there are eight oak trees that were donated by local residents. 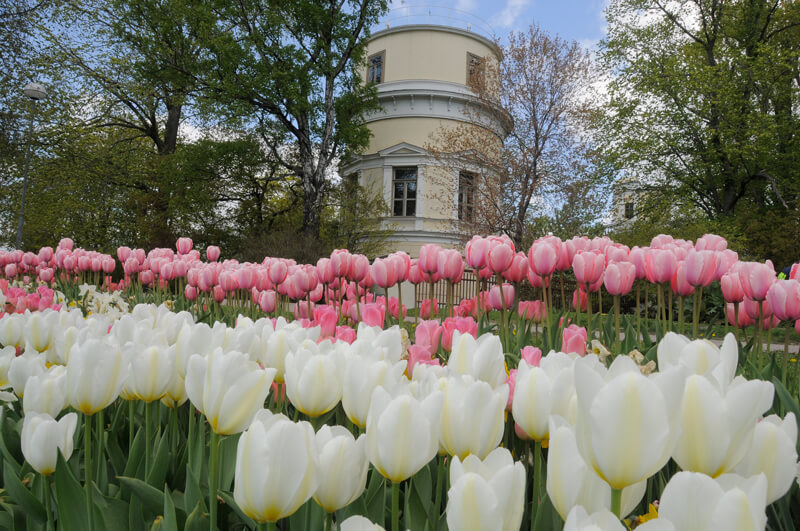